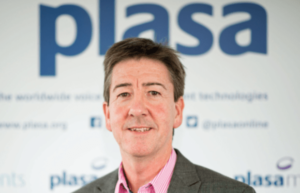 Since Peter Heath took over as managing director of PLASA, the annual London show has gone from strength to strength, with this month’s outing set to see the number of audio exhibitors increase by an impressive 18% on 2017. Daniel Gumble asks the former Roland man what the pro audio community can expect from this year’s event…

From September 16-18, the annual PLASA show returns to London’s Olympia for three days of exhibits, seminars, networking opportunities and a whole lot more to boot. Building on last year’s outing, which saw a 23% increase in the number of audio exhibitors, PLASA 2018 is set to up its audio game further still with another 18% rise.

However, one doesn’t have to cast their mind too far back to recall a time when things weren’t looking quite so rosy for the London show. Facing strong competition from a raft of trade show competitors and a perceived lack of focus in its audio offering, it seemed as though the industry was beginning to lose faith in the event, with visitor numbers dwindling and audio exhibitors falling by the wayside.

In many ways the show had reached a crossroads – completely overhaul its content and reposition itself on the trade show calendar, or rediscover its audio roots and win over the doubters. Evidently, its organisers opted for the latter, and with the appointment of former Roland executive Peter Heath as its new managing director, delivered a masterstroke that has triggered something of an ongoing renaissance for the show.

When Heath arrived in 2016, he brought with him a keen understanding of the pro audio market and a strong commitment to restore the key elements that made PLASA such an outstanding show in the first place, as its impressive year-on-year growth and the return of some high-profile exhibitors demonstrates.

Here, Heath tells PSNEurope what’s in store for 2018 and why the pro audio industry is returning to PLASA en masse…

Well, this year we think our visitors will enjoy the most exciting show since we returned to Olympia; we have over 200 brands and 48 seminars with 58 world- renowned expert speakers. It will be the most balanced programme with more audio exhibitors, including the likes of L-Acoustics, joining the already strong lighting and video businesses. We will even have audio demos running throughout the show from a number of loudspeaker manufacturers.

The seminar programme, ranked as the best in the industry last year, has expanded further, with new topics ranging from IEM Monitoring/Care for our Ears, Mental Health in the industry, Immersive Audio, Load Monitoring and Aerial Forces to Personal Development and Business Coaching. We have so many amazing speakers and panellists, highly respected in their fields, that I recommend all our visitors try to spend some time with them.

What can pro audio exhibitors and visitors expect from this year’s outing?

Pro audio is going from strength to strength at PLASA: even more relevance; and even more valuable content. On the show floor; following the 23% increase last year, we will see another increase of 18% in audio exhibitors, making this a truly rounded show for the entire industry.

The seminar and product training programmes, which will run all three days, also boost the value for any audio-centric visitors, with 16 dedicated sessions including: Wireless as a Production Tool, Training and Apprenticeships, and System Design using SMAART,
all presented by Britannia Row; Business Convergence by Bryan Raven of White Light, and John Penn from SSE; to Immersive Sound, which involves Digico, Clair, L-Acoustics, and Britannia Row. There’s even one entitled: How Not to Run Out of Clean Pants from Soul Sound, which you’ll have to come along to if you want to find out what it’s all about…

Why do you think there has been such growth in the number of audio exhibitors?

We have spent a lot more quality time talking to our audio community and, more importantly, listening – considerably more so than we have in the past six to eight years. Through meetings with manufacturers, production and theatre operators in our Audio Steering Group, we have taken a lot of feedback, some of which we have been able to implement immediately, and some will take a little more time; however, the feedback from last year’s show was extremely positive from this group, which provides us encouragement, and a much more stable platform to grow. This has contributed to the increase in audio at this year’s show, and that’s a trend we are determined to continue. Furthermore, we have taken more account of the convergence of business in our markets: something Bryan of White Light, and John of SSE will cover in a panel session at the show.

How much of an effort has there been to renew the pro audio community’s enthusiasm for PLASA since you took over the reins? Presumably the return of an exhibitor such as L-Acoustics sends a positive signal to the rest of the market?

Yes, it’s great to see our friends from L-Acoustics returning to the show; this is a big statement of support for the show and our audio visitors. My background is largely audio, having worked for Roland for almost 20 years; still playing keys and guitar in a gigging band as well as running the PA keeps me closely in touch with grassroots audio, as well as the top end, hence I feel I’ve been able to bring something to help us adjust the balance of the show.

As I mentioned earlier, we have made great efforts to listen to the market, something our previous operation didn’t do so well, hence some of the feedback was hard to hear, but it gave us the knowledge and determination to rebuild the PLASA show, and based on last year’s results and this year’s bookings, we’ve turned in the right direction. This engagement with the industry also underlined the market’s desire for a UK-based show and seminar programme.

Tell us more about this year’s seminar programme. What are the key subjects under the microscope?

Immersive Audio is a big topic as are Rigging topics including Aerial events, Lighting and Audio Modelling and Analysis and Audio Mixing Techniques. As there are so many topics covered over the three days, it’s unfair to raise the importance of some above the rest. I’d like to think there is something for everyone in the programme, so I really urge those considering visiting the show to visit the What’s On section of the PLASA show website, and sign up quickly while it’s all free.

How vital is this kind of content to the future success of PLASA?

As an association dedicated to the wellbeing of the entertainment industry, it’s vital we remain relevant, add value and provide leadership on industry issues. This often translates into training and coaching, but sometimes means lobbying Government or the EU, or combining with other associations to influence standards and practices. Inevitably, the content for our seminars at the show will have an influence on future thinking, and will raise issues that need our attention, or great ideas that the industry can benefit from; it’s a very positive evolutionary cycle, and we’re pedalling it as fast as we can.

What are the biggest opportunities for PLASA in 2018 and beyond?

I’d like to answer this as a response to ‘What are the biggest opportunities for exhibitors and visitors to PLASA 2018?’, as we should be measured by the success of our customers.

First of all, we are providing the biggest UK
trade show for the industry – that’s manufacturers, distributors, and retailers alike – to show off new products and technologies; between our London and Leeds shows we attract over 10,000 visitors and more than 250 exhibitors.

Secondly, via the most comprehensive seminar and training agenda we’ve ever delivered, we are able to help educate the industry by providing a unique platform for the amazing number of international experts and service providers the UK can boast, to pass on their knowledge.

And what are the biggest challenges?

Haha! Ask any events organisation, and they will give you a long list ranging from things outside of our control like weather, the economy, and transport, to ensuring the content, promotions and messaging are on track to attract the right audience.

But our unique position is that we are an industry association; this is ‘written on our tin’, and with that comes a great responsibility to deliver the best programmes and content to help, lead, inform, educate, and improve our industry as a whole.

This doesn’t start and finish at our shows: we run an annual programme of events and coaching sessions including the National Rigging Certificate, Technical Skills, Sales, Marketing and Branding Coaching, right through to better awareness of the threats and care of mental health in our industry, for which we run a number of fund raising activities.