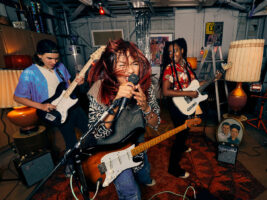 16 million Americans have picked up guitar over the last two years, according to Fender study

A new market study from Fender has revealed that over the last two years, 16 million Americans have started learning how to play the guitar, with more than half citing COVID-19 as the reason why. The brand has also unveiled some new tools to help this booming market of beginners stick at their instrument.

16 million Americans – 72 per cent of which are aged between 13 to 64 – account for a whopping seven per cent of the US population. 62 per cent said they picked up the greatest hobby in the world due to COVID-19 and the subsequent lockdowns
The study tallies with Fender’s record sales in 2020, which CEO Andy Mooney then attributed to an influx in e-commerce and beginner gear sales.
Fender’s latest study also broke down some other numbers about player habits in the last two years. First, it took a look at how social video platform TikTok has influenced content.
67 per cent of beginners were said to seek out and watch guitar content ever week: 19 per cent daily, and 48 per cent weekly.
The findings also showed that 38 per cent of those new players identify as Latinx. Of that percentage, hispanic players were said to be learning guitar with the purpose of creating music and performing.
When it comes to practicing habits for beginners, 53 per cent say they spend at least two hours a week practicing. That same group also believes that, in order to “get good” at guitar, up to four hours a week for at least one to two years is necessary.
Sticking to the instrument isn’t quite as easy as starting it, however, as Fender found in its study that one of four players have “stagnated” in their process.
With this wealth of data regarding the habits of beginners, Fender intends to better support those just starting out on the instrument through its beginner tools such as Fender Play. There’s also the newly-launched Beginner’s Hub, a network of online tools and resources aimed at providing a complete package for beginner guitarists, bassists and ukulele players, with a goal of helping more players stick at their chosen instrument.
Andy Mooney, Fender’s CEO explained the choice to launch the hub now: “The pandemic rapidly accelerated the already healthy growth in beginner guitar players and we accelerated our investment in tools to support them. Our suite of Beginner Tools enables new players to enjoy the process of learning to play music they love and perhaps go on to create music we all will love.”
The Beginner’s Hub will provide users with access to Fender Play, the brand’s extensive video learning platform. It’s also now home to the new My First Fender experience. Hosted by musicians such as Brothers Osborn, Brad Paisley, Larkin Poe and Jim Root, this video series goes over the musicians’ own journeys from beginners to experts.
Fender is also aiming to make the purchasing of a new guitar less intimidating, by providing a new “Find Your Fender Quiz.” This asks a series of questions about genre, aesthetic, budget and sonic preferences, and then provides a handful of guitars suited to those choices. There are curated bundles of instruments in the Beginner hub for different needs if you don’t want to take the quiz.
Find out more about the Find Your Fender quiz, here and see the beginner hub here.
The post 16 million Americans have picked up guitar over the last two years, according to Fender study appeared first on Guitar.com | All Things Guitar.