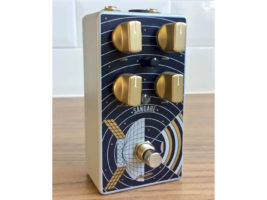 Every month, we’ll compile a few lists of gear that’s fresh out of the oven. Here’s one devoted to new guitar pedals.
Magnetic Effects Sandare V2

This is an update of the brand’s overdrive/booster pedal. New to this circuit is a voice control knob that dials in an overall EQ response.
3 Leaf Audio Chromatron
3 Leaf Audio’s Chromatron is a state variable filter that can take you from old-school, Hendrix-esque quacks to futuristic synth soundscapes.
Amptweaker DepthFinder
Here’s an EQ pedal that allows you to add resonance and presence to your mix. This enables you to dial in tube-like qualities to your tone.
MD Effects Compactor V2
This pitch-black compressor unit adds definition, sustain and punch to each note you play. It also features deep compression capabilities that ensure the dry signal isn’t lost in the mix.
Amptweaker Curveball Jr EQ/Boost

You’ll notice right away that this fuzz box is inspired by the classic Tone Bender design. So while it may only have three knobs, it delivers a variety of overdrive and fuzz options.
Coffin Frost Bite Fuzz
This fuzz pedal was designed in collaboration with Haunted Labs’ Christopher Cozort. It’s based on a silicon circuit and dials in a range of tones, from classic fuzz to shocking distortion.
DSM Noisemaker OmniCabSim Mini

The Wampler Fuzztration is a fuzz circuit with a wide range of tones and an independent octave effect.
Abasi Pathos

One of 2018’s most highly anticipated pedals, the Dark World is a dual-channel reverb that has both modern and vintage tones. It was designed in collaboration with Keeley Electronics and Cooper FX.
Fuzzrocious Grey Stache
The Grey Stache is informed by two of the most iconic iterations of the Big Muff ever created: a GGG-tuned version with more overdrive than fuzz, and a Civil War mod that hails from Russia.
Dwarfcraft Devices HAX2
The HAX2 is a modulation unit that’s all about sci-fi sounds and textures. It’s got a ring modulator, an envelope follower and resonant filters.
Magnetic Effects Black Moon
The Black Moon is inspired by Dunlop’s germanium Fuzz Face, but features a couple of modifications of its own: namely, “Bias” and “Input” controls.
Ground Control Audio Tsukuyomi Midrange Booster

Inspired by the Tube Screamer, the Tauren Overdrive is a no-nonsense OD unit with only “Volume”, “Tone” and “Gain” controls to manage.
Emma Electronic Navigator Delay
The Navigator Delay packs a multitude of features, including delay and modulation effects, trails, and an uncommon beat-split option.
Friedman BE-OD Deluxe

As its name suggests, this one is an upgrade of the brand’s popular BE-OD unit. Enhancements include an added channel and midrange controls.
Joyo Uzi Distortion

Lawrence Petross Design has beefed up its Sixty 8 Overdrive circuit with an additional channel. Otherwise, it still features a transparent overdrive that’s modelled after a ’68 Plexi.
RPS Effects Vitamin C
The Vitamin C is a multi-talented boost pedal that can inject your play with some “juicy” gain, but can also double up as a simple buffer.
The post 25 new pedals and effects units: December 2018 appeared first on Guitar.com | All Things Guitar.