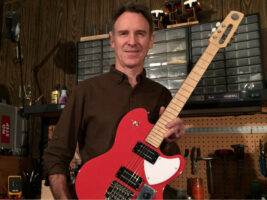 Vibrato systems are often an integral part of an artist’s sound. Some, such as the Bisgby or the Strat’s floating tremolo have stood the test of time as gentle musical additions to electric guitars while others, such as the Floyd Rose, allow much more excessive whammy wanging. Some, however, have not quite caught on for various reasons and in this article, we will take a look at some of the more interesting, options that have come and gone over the years, and some new developments that have come on the market in recent years.

READ MORE: The story of Brian May’s Deacy amp, the little amp that could

The drawback of the EverTune is that it is a bit cumbersome and does require that some wood to be removed from your guitar. If you want to use one of these bridges, I highly recommend bringing it to someone who has installed one before.
For more features, click here.
The post 4 weird guitar vibrato systems you probably forgot about appeared first on Guitar.com | All Things Guitar.