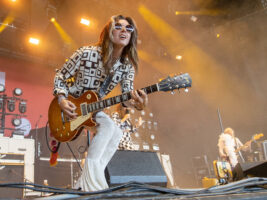 9 guitarists who define the new wave of classic rock

For old-school fans of classic rock, you know the deal: the genre is loaded with expressive vocals, thundering drums, pounding bass, and, most importantly – explosive guitars.
Many of us grew up listening to the likes of Led Zeppelin, Aerosmith, KISS, and Heart via FM radio, and at times, that could get a bit stale and admittedly repetitive. And so, when the new wave of classic rock was ushered in over the last decade, many were perhaps a touch skeptical.
It didn’t take long for nostalgia to come face to face with the volcanic creativity seething out of the pores of newcomers like Greta Van Fleet, Thunderpussy and Dirty Honey. What’s more – and much to the surprise of many – these burgeoning all-stars not only met the expectations laid by their forefathers but, in many instances, they exceeded them.

We can say a lot about the new wave of classic rock, but let’s allow the guitarists who have shaped the era thus far do the heavy lifting. What follows are nine guitarists who define the new wave of classic rock.
9. Griffin Tucker of Classless Act
Griffin Tucker of Classless Act. Image: Kevin Mazur / Getty Images for Live Nation
Listen to: Welcome to the Show
As newcomers to the new wave of the classic rock scene, Classless Act took a huge step forward in 2022. First, the LA-based outfit released its debut, the aptly titled, Welcome to the Show, and then, the young rockers were tabbed as openers for 2022’s world-beating Stadium Tour. Classless Act does many things well, but its guitar-based heroics are where this band shines. Driven by Griffin Tucker’s searing leads and ear-imploding power chords, it’s not hard to envision Tucker rising to the top of the proverbial heap in 2023.
8. Hannah Findlay of Stonefield
Hannah Findlay of Stonefield. Image: Martin Philbey / Redferns
Listen to: Shutdown
Alongside her skin-thumping sister, Amy, Hannah Findlay of Australian rock outfit Stonefield is taking her guitar heroics to new heights. A sublime amalgam of hard rock with psych-laced freakouts that haven’t been seen in some time, Findlay is a rare breed in a sometimes-stagnant era. Known to wield a mixture of Gibson Les Pauls and SGs, Findlay’s fuzzed-out exploits across Stonefield’s record are a thing of late-60s throwback beauty.
7. Jake Kiszka of Greta Van Fleet
Jake Kiszka of Greta Van Fleet. Image: Erika Goldring / Getty Images
Listen to: Highway Song
Love by some and derided by just as many, there’s no denying that Michigan’s Greta Van Fleet aided in ushering in the new wave of classic rock. Sure, they wear their influences on their collective sleeves (hello, Led Zeppelin), but that doesn’t minimize the band’s exploits, specifically as they relate to their lead guitarist, Jake Kiszka. Playing sideman to Greta Van Fleet’s font man (and Jake’s brother), Josh Kiszka, Jake has managed to remind fans of the magic of ’70s classic rock, and for that, we shall always be grateful.
6. Tyler Bryant of Tyler Bryant and the Shakedown

Listen to: Ghostrider
Hailing from Paris, Texas, and with a signature pink Stratocaster in his hand, Tyler Bryant has combined blues and hard rock music in ways not often seen since Clapton’s days with John Mayall & the Bluesbreakers. And with Brad Whitford’s son, Graham, handling rhythm duties for the Shakedown these days, now more than ever, Bryant has space and freedom to howl at the moon with vigor. Inherent skill aside, what makes Bryant unique is the guttural soul he injects into his playing, allowing him to converse with listeners through a unique musical language.
5. Blake Allard of Joyous Wolf
Blake Allard of Joyous Wolf. Image: Gabe Ginsberg / Getty Images
Listen to: Fearless
With a Les Paul in hand, Orange County native Blake Allard is harkening back to the classic rock era through his uniquely vintage aesthetic and cataclysmic riff-driven style. Truly humble yet utterly talented, Allard’s solos careen across listener’s speakers with breakneck intensity, culminating in sudden, blues-driven refrains steeped in graceful splendor. Some players have the “it” factor, and to be sure, Joyous Wolf’s young guitarist has “it” in spades.
4. Tristan Thomas of Florence Black

Listen to: Can You Feel It?
Tristan Thomas of Welsh three-piece Florence Black, makes his Les Paul howl with emotion and screen with pain, and he does so with a mile-wide grin creeping across his bearded face. If you’ve heard the uber-heavy music of Florence Black, then you’ve borne witness to Thomas’s unique blend of ’70s meets ’80s meets ’90s style that is as singular as it is familiar. There’s something about Thomas’s playing that dig into unsuspecting listeners’ souls at a molecular level. For that reason, this once-in-a-generation talent is one to continue to watch.
3. Jared James Nichols
Image: David McClister
Listen to: Hard Wired
Nichols has probably been on most listeners’ radar for some time now, and it’s for a good reason, as his bluesy, Les Paul-accented riffs and solos are vital cogs in the new wave of classic rock’s wheel. Having recorded some of the more notable music of the genre over the last decade, Nichols’s impact on young guitarists and the viability of the genre are set in stone. Moreover, his ability to carefully balance his ability to shred against the need to maintain listenability is just one of his many calling cards that Nichols has painstakingly honed over the last decade.
2. Whitney Petty of Thunderpussy
Whitney Petty of Thunderpussy. Image: Tim Mosenfelder / Getty Images
Listen to: Velvet Noose
During classic rock’s 60s and 70s heyday, the scene was unfairly lacking in female heroes. But as long as bone-crushing guitar heroes like Thunderpussy’s Whitney Petty are around, the future to the end is looking much brighter. A beacon of light for young women looking to pick up the guitar, Petty has aided in the resurgence of classic rock in the modern era through heavy riffing, tasteful yet mind-altering solos, and a gift for catchy songwriting. Few guitarists on the scene today swagger across the stage like Petty, and for that reason, along with dozens of others, Thunderpussy and Petty’s rounds of applause are well-earned.
1. John Notto of Dirty Honey
John Notto of Dirty Honey. Image: Scott Legato / Getty Images
Listen to: Scars
Dirty Honey has become darlings of the new wave of classic rock scene, and to be fair, it’s not hard to see why. The band overall is outstanding, but with a guitarist like Massachusetts native John Notto on board, success was all but pre-determined. With a late-50s Les Paul Burst in hand, and a God-given ability to unleash the Kraken through chugging riffs, seismic rhythms, and unholy solos, Notto is the poster child for all things classic rock in the modern era. Few guitarists are worth the price of admission alone, but in the case of John Notto, we indeed have one of those rare breeds.
For more guides, click here.
The post 9 guitarists who define the new wave of classic rock appeared first on Guitar.com | All Things Guitar.