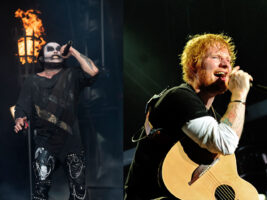 A Cradle Of Filth and Ed Sheeran collaboration is actually on the way, according to Dani Filth

Cradle Of Filth frontman Dani Filth has confirmed that he’s been emailing pop superstar Ed Sheeran about a possible collaboration, sparking hope for one of the most unlikely musical team-ups in history.

READ MORE: Ed Sheeran says he “would not be opposed to creating” a metal record

Ed Sheeran loves collaborating, if his star-studded 2019 album is anything to go by. He also recently confessed to being a fan of metal bands such as Cradle Of Filth and Slipknot when he was younger, saying that he wouldn’t be opposed to creating his own metal music.
Dani Filth responded positively on social media, a response that apparently got him in touch with Sheeran. Speaking to Kerrang backstage at Bloodstock 2021 (as reported by Planet Radio), Filth revealed: “I’ve actually been emailing with [Sheeran],” before clarifying that he wasn’t joking. “No no, it’s true!” he said. “He actually touched base with me.”
“I’ve been invited up to his place. Well, he said he could come down to mine, but I pointed out to him that I don’t own my own bar or village, and it’d be better if I went there. He said he’d do anything. Quite literally. He said he’s a massive fan. He seems like a genuinely very nice guy actually.”
Sheeran may love musical collaborations, but his choice of musical partner skews towards mainstream pop rather than anything resembling extreme metal. The world of Justin Bieber, Eminem and Beyonce has – until now – been the one Sheeran has stuck to.
Cradle Of Filth, on the other hand, have had a testier relationship with the mainstream since the 1990s. They’ve courted controversy with their graphicly sexual and violent imagery, including an infamous T-shirt adorned with the words “Jesus is a cunt,” on the back, with the front depicting a naked, masturbating nun. It’s safe to say that Ed Sheeran’s merchandise isn’t at risk of being banned in New Zealand like this shirt was.
So what will be the musical result of this email chain? A one-off single? A full album? A new 20-year career for Ed Sheeran complete with blast beats and Satan? Right now, we can only speculate. But whatever it ends up as, it’s perhaps the furthest apart two artists have been before reaching out and collaborating, one that could only be matched by Bruno Mars doing a split EP with Cattle Decapitation.
The post A Cradle Of Filth and Ed Sheeran collaboration is actually on the way, according to Dani Filth appeared first on Guitar.com | All Things Guitar.