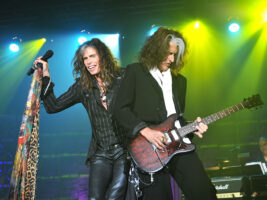 Aerosmith have inked a deal to move their entire catalogue to Universal Music Group (UMG) in 2022. The deal gives Universal access to rare content from the band’s vaults and from the personal archives of individual Aerosmith members.

Universal announced the deal yesterday (23 August), saying it will encompass “future music projects” along with “new film, television and other audio-visual content projects” that celebrate the band’s history and cultural impact.
Aerosmith released their first seven albums under Sony/Columbia, beginning their eponymous debut in 1973. With the decision to move their catalogue to Universal, it appears the band are regaining the rights to those records next year.
Under the new deal, Universal plans to release “never-before seen and heard gems” from the band’s Vindaloo Vaults. Members Steven Tyler, Joe Perry, Tom Hamilton, Joey Kramer and Brad Whitford will also be involved with the curation of releases from their own archives, which will include rare music, film footage and journals.
The financial details of the deal have not been made public.
The deal comes as Aerosmith officially celebrate their 50th anniversary this year. The occasion had been pushed back a year to 2021 in view of the COVID-19 pandemic.
Guitarist Joe Perry commented on the deal on behalf of Aerosmith, saying: “This will allow us to bring our music to our fans in ways we never were able to before. It’s something we’ve dreamed about happening for a long time.”
“It’s been a long road but I’m extremely happy and proud to say […] we have been able to bring our 50 years of music under one roof by partnering with UMG,” he continued. “Needless to say we are very excited.”
The post Aerosmith ink deal to move entire catalogue to Universal, release rare content appeared first on Guitar.com | All Things Guitar.