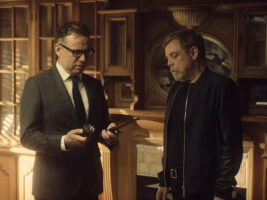 George Harrison’s track My Sweet Lord has received an official video, celebrating the 50th anniversary of his solo album All Things Must Pass.

The new video for the track features a cast of over 40 musicians, actors and comedians, including Mark Hamill, Fred Armisen, Tim and Eric, Taika Waititi, Mitra Jouhari, Reggie Watts, and countless others. Also appearing are Harrison’s former bandmates Ringo Starr and Jeff Lynne, as well as his wife Olivia Harrison and son Dhani Harrison.
Harrison had a strong connection to the world of comedy, partially through his own film studio HandMade Films. Among films like Time Bandits and Withnail And I, the studio is perhaps best known for the reason it was founded: Harrison formed it in order to finance Monty Python’s Life Of Brian after other investors pulled out.
This connection inspired the tone and stars of the video, as director Lance Bangs explained in a press statement: “George threaded a sense of humour through all of his videos, so we kept that spirit and filled the cast with friends and admirers of his music, many coming from the current comedy landscape. I tracked down vintage prime lenses from some of the films George’s HandMade Films had produced, and I hope that viewers can feel a sense of wonder and searching while they watch it, and that the song continues to add to all of our lives.”
As to the concept behind the video, Bangs explained: “The approach was to represent the song visually while these agents and inspectors kept missing the metaphysical wonder around them. Images are choreographed to the sounds of vocal melodies, guitar strums, drum patterns, chord changes.”
You can see the video below.

Earlier this year, a 50th anniversary edition of All Things Must Pass was released. The set featured new mixes of the tracks, and a number of special editions all executive-produced by Dhani Harrison.
The post All-star cast pays tribute to George Harrison in new video for My Sweet Lord appeared first on Guitar.com | All Things Guitar.