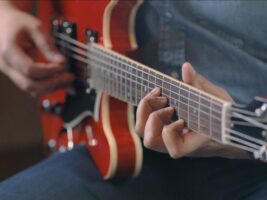 Ad feature with Elixir Strings
In this video, we’re diving deeper into the world of altered tunings for electric guitarists. Hardtail guitars work better if you’re regularly changing between tunings but good-quality strings should help your instrument settle even if it has a floating vibrato or Bigsby.
D#D#AAEE
One of the pioneers of textural tunings is Thurston Moore of the band Sonic Youth. This tuning features on their track Rain King – or, rather, this is what they think they used. When the band had to relearn the song to play on tour, they discovered they couldn’t remember its original tuning. Remember: always write your tunings down.
The beauty of this tuning and others like it comes from the doubled notes, which result in an expressive, deep chorus-style effect. It’s an ideal tuning for cavernous reverb-heavy fuzz textures but also works beautifully for behind-the-bridge playing.
Sonic Youth have employed countless unorthodox tunings over the years. Many of them have been brutal but there’s much to learn from their approach.
Tritone Tuning (CF#CF#CF#)
A firm favourite with cloven-hoofed guitarists around the world, this tuning grants players immediate access to slab-heavy textures and tones. But tritone tuning has also found favour in the free-jazz and folk communities, who love it for its overtone potential. Even extreme tunings such as this one are surprisingly versatile.
Drop into this tuning for a spooky augmented-fourth feel that’s well suited to ominous chord voicings. This register also makes it easy to solo along the diminished scale, as the scale’s notes are lined up along the fretboard.
New Standard CGDAEG
Developed by legendary guitarist Robert Fripp of British prog gods King Crimson, this tuning is built around the idea of fifths, with a minor third between the first and second strings.
This tuning is designed to offer players an expanded range. As such, Fripp went as far as to christen it New Standard – pretty bold even for a bona fide guitar icon.
Open tunings are often used to make big chords more accessible and New Standard tuning does exactly that. It can also be devastatingly effective as a tool for throwing open your solo ideas, allowing players to access some utterly bonkers phrasings.
Where do we go from here?
Using different tunings can be creative and rewarding. We hope this video will encourage you to explore unusual tunings in your own music.
Have fun and remember that there are no rules when it comes to getting experimental with any and all aspects of the electric guitar.
The post An Introduction to alternate tunings: Advanced alternate tunings for electric guitar appeared first on Guitar.com | All Things Guitar.