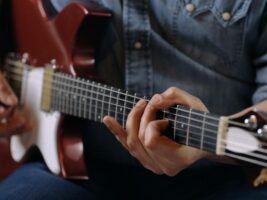 Ad feature with Elixir Strings
While alternate tunings are very common with acoustic guitarists, their use among electric players is still relatively rare. However, many classic recordings have been made with alternate tunings.
A couple of things to bear in mind before we go any further – first of all your guitar may take a little while to stabilise when in a different tuning – especially if it has a locking or floating vibrato system. Obviously, high quality strings can help minimise this.
Also, if you are dropping the strings more than a couple of semitones you may find that when you finger a chord, the intonation is dragged sharp. Listen carefully to your playing and adjust accordingly.
Finally, most of these tunings respond best to temporal effects and at most, a light overdrive. But don’t worry – you can still rock out!
Drop D
The first tuning we’ll look at is Drop D – it’s a very simple tuning to put your guitar into, as the name suggests, Drop D tuning involves dropping the low E string to D. That’s it, that’s the tuning.
Suddenly a D Chord has a lot more meat to it – something that players from Tom Morello to Kurt Cobain have taken advantage of. Power chords can now be played with a single finger for some huge riffs and Drop D can also unlock some beautiful rhythm chord textures for clean sounds.
Open G
One of the most common tunings for electric guitar is Open G – this is a fantastic tuning for blue and rock and roll players and is famously one of Keith Richards favourite tunings.
As the name suggests – open G tuning is based on an open G chord, however, there is a bit of a twist as you’ll see! The open strings form a second inversion of a G chord with a D in the bass. This gives you some really beautiful sounding chords that you might struggle to recreate in standard tuning.
Bear in mind that you’ll have to do some muting with your thumb to stop the 6th string ringing when you don’t want it to. Or you can just do what Keith does and get rid of it altogether!
DADGAD
DADGAD is a legendary tuning amongst acoustic guitarists, and it can be amazingly effective on electric guitar too!
DADGAD was discovered in the 1960s by a guitarist called Davey Graham and has since been used by players such as Jimmy Page, Jeff Tweedy and even Slipknot – it’s an open door to some amazing new sounds!
The main advantage of DADGAD tuning is the extended bass range coupled with the fact that the open strings form a suspended 4 chord. This is neither major nor minor and means that the tonality of what you are playing is not dictated by the tuning you are using – Explore it and have fun!
We hope you’ve enjoyed this introduction to altered tunings for electric guitar – see you in the next one for some truly avant garde approaches!
The post An introduction to alternate tunings: Drop D, Open G and DADGAD for Electric Guitar appeared first on Guitar.com | All Things Guitar.