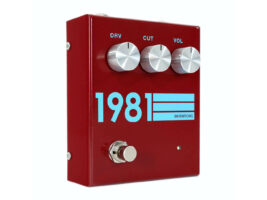 Andertons teams up with 1981 Inventions for limited-edition DRV

UK retailer Andertons has teamed up with pedal maker 1981 Inventions to release a limited-edition version of its DRV pedal, a sought-after distortion pedal that for this release comes in an exclusive colour.

For the 50-piece run in partnership with Andertons, 1981 Inventions has decked out the DRV in ‘Claret & Blue’, which features a deep red finish for the body of the pedal and a bright blue for the logo and knob labels. The colours are also famously those of West Ham United FC, of whom Anderton’s head honcho Lee ‘The Captain’ Anderton is a fan.
Inside, the pedal itself is the same DRV circuit that earned it a perfect 10 when it came by our review bench all the way back in 2019. The drive is based on an old ProCo Rat circuit, with numerous tweaks, such as less gain, and a revised filter section and frequency response for a subtle, versatile drive sound.
Controls are the same stripped-back trio you’ll find on any Ratalike, with drive (or DRV), cut and volume. Construction takes a no-expense-spared approach, with high-quality circuit components, input and output jacks and a sturdy enclosure.
The Andertons-exclusive DRV is available now, listing for £250.
Last June, 1981 Inventions announced its first run of non-limited pedals, accepting all orders that came in in a four-day period. These pedals were also available in a veritable rainbow of colourways.
The post Andertons teams up with 1981 Inventions for limited-edition DRV appeared first on Guitar.com | All Things Guitar.