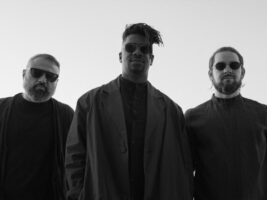 Animals As Leaders announce new album Parrhesia, see the gorgeous video for new track The Problem Of Other Minds

Instrumental prog stalwarts Animals As Leaders have announced their first album in six years, Parrhesia, following the recent release of their return single Monomyth. The new album’s announcement arrives alongside the release of second single The Problem Of Other Minds.

Parrhesia follows 2016’s The Madness Of Many, and is set for release on Sumerian Records on 25 March 2022.
Guitarist Tosin Abasi stated of the record in a statement: “It’s been a while since we’ve released a body of work. We’re really proud of this collection of songs as well as the visual components, and are excited to share it with all of you.”
The visual component is indeed something to be proud of, as the video for The Problem Of Other Minds has been launched alongside a gorgeous video featuring choreography and dancing from Tlathui Maza and the Nohbords dance group, the team behind the video for previous single Monomyth. Take a look below.

The album can be preordered over at animalsasleaders.org.
The post Animals As Leaders announce new album Parrhesia, see the gorgeous video for new track The Problem Of Other Minds appeared first on Guitar.com | All Things Guitar.