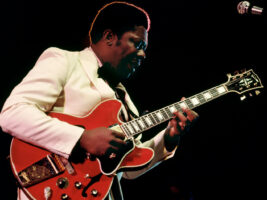 The BB King Music Company, which manages the estate of BB King and related trademarks and copyright on behalf of the King Family Trust, has announced a “revitalised” partnership with Gibson.

The partnership comes ahead of the launch of a new line of BB King signature Lucille guitars from Gibson and Epiphone, as well as the commencement of production of an officially licensed biopic. This film is separate from The Thrill Is On, which is another biopic about King that is not officially sanctioned by his estate.
Vassal Benford, Chairman of the BB King Music Company said of the new partnership: ““It has been a pleasure working with the Gibson team in developing a new line of B.B. King Signature Lucille guitars.
“I am especially proud of the forthcoming new Epiphone guitar and delivering a true work of art that will be broadly accessible, awakening B.B. King’s life and legacy to new artists. Gibson is a tremendous partner and they have demonstrated a sincere alignment with our mission to not only preserve the legacy of BB King, but to expose new artists to his music. This is just the beginning, a theatrical release biopic movie is near production, as well as the creation of The B.B. King Experience as a touring show, and a residency experience in Las Vegas.
“We will also be creating a new catalogue of music collaborations with contemporary artists, and several lines of new B.B. King products are in development. We are looking forward to 19 October 2021, the official launch of the new Epiphone Lucille guitar with Gibson, plus much more.
Gibson’s Elizabeth Heidt added: “BB King is a cornerstone of Gibson’s music history, and we are honoured to bring his legendary music and persona to a new audience. From high-end Gibson Custom Shop guitars to more accessible Epiphone models we will be offering beautiful guitars for every fan to help carry on his vast music legacy.”
Gibson also recruited some of its signature artists for a tribute video to BB King, released on his birthday (16 September). Take a look below.