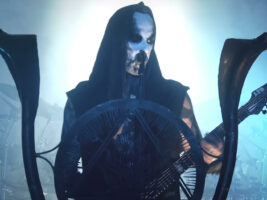 Not to be deterred by their frontman’s several brushes with blasphemy law, metal band Behemoth have announced a new live album In Absentia Dei, the special edition of which comes with a cardboard church for some at-home arson.

The live album documents Behemoth’s live-streamed event of the same name, which was filmed in a church and featured a number of dramatic production choices, namely a lot of flames, even more fog and a lot of inverted crosses.
The release will arrive on 17 December, as a digital download, 3LP vinyl and digibook. The DIY cardboard recreation of the church the show was filmed in is exclusive to the Nuclear Blast vinyl release, and if the album cover is anything to go by, it’s not expected to stand for very long
Nergal said of the record in a statement: “In Absentia Dei was a massive challenge and a huge risk, but it was a great artistic and commercial success. The response was absolutely brilliant – we made a statement with this performance and set the bar high. I hope that we can continue to raise the bar with the projects to come!”
Get a taste of the album with the performance of Evoe, available below.

Preorder the record here.
The post Behemoth’s new live album comes with a cardboard church you can burn appeared first on Guitar.com | All Things Guitar.