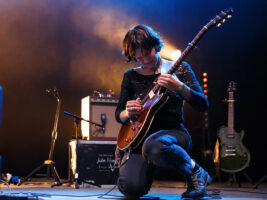 READ MORE: “There’s a lack of preciousness that I think is precious”: Big Thief’s Buck Meek on the human connection in new LP Two Saviors

Both were produced by the band’s drummer James Krivchenia, and recorded at Five Star Studios in Topanga, California and the Catskills’ Flying Cloud Recordings.
Krivchenia said of Little Things: “It’s in this sort of evolving free time signature where the beat is always changing, so Max [Oleartchik, bassist] and I were just flowing with it and guessing where the downbeats were – which gives the groove a really cool light feeling.”
He added of Sparrow: “We all just scattered about the room without headphones, focused and in the music – you could feel that something special was happening.
“It was a funny instrumentation that had a really cool natural arrangement chemistry – Max on piano, Buck [Meek, guitarist/vocalist] providing this dark ambience, me on floor tom and snare and Adrianne in the middle of it with the acoustic and singing.”
Both of the tracks have arrived onto streaming services and YouTube today, with some subtle hand-drawn visual accompaniment. You can take a listen below.

We spoke to Big Thief guitarist Buck Meek earlier this year, when he revealed that the band had quietly begun recording their next album, saying it’s set to be “certainly different”.
“Lockdown was a well-needed respite, I needed a break, and then Big Thief ended up making new music for nearly six months, which was really nice because we’ve been touring so hard we’ve had little chance to record in the last couple of years.
“This is my seventh or eighth release in eight years and the first time I haven’t been able to go out and share the songs. I’m trying to look at it as an opportunity, probably for the only time, to put out a record then immediately start working on another.”
The post Big Thief release two new songs, their first since 2019 appeared first on Guitar.com | All Things Guitar.