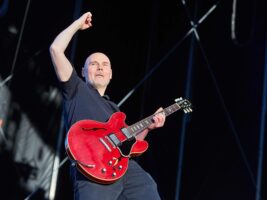 Billy Corgan of the Smashing Pumpkins has discussed the future legacy of the band, and how the band will be remembered in rock history.

Speaking to The Guardian, the American musician and now-wrestling promotor has reflected on the current era of the Smashing Pumpkins and how it has become challenging to stand out when producing new music, noting that fans are mostly interested in their older songs.
“I’m not competing against Kurt and Eddie,” says Corgan. “I’m competing against the biggest pop stars in the world with like 14 publicists and 30 writers.”
However, fans’ admiration for the band’s older music, rather than new releases such as the single Beguiled that was released earlier this year, has left Corgan anxious about how the band will “endure” in rock history.
“If you look at us through a kind lens, we’re a wildly successful band for being as weird and as different as we are. If you look at us through another lens, we’re just a pile of wasted opportunity.
“One of my biggest disappointments, sometimes when we play a concert, is you don’t get the sense that the audience understands how rare it is that we’re actually standing there. It’s 34 fucking years later,” says the guitarist. “You got three-quarters of the OG band in front of you, we’re ready to play and we want to be here.”
This is all in the shadow of the band’s latest guitar driven 33 track concept album, Atum: A Rock Opera in Three Acts, with Act I set for release on 15 November via Martha’s Music/Thirty Tigers.
You can listen to Beguiled, the first single on the new album, on all streaming platforms now, or by visiting SmashingPumpkins.com.
The post Billy Corgan on the future of Smashing Pumpkins: “I’m not competing against Kurt and Eddie – I’m competing against the biggest pop stars in the world” appeared first on Guitar.com | All Things Guitar.