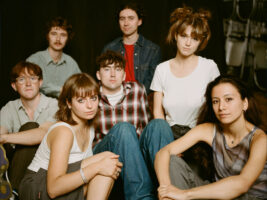 UK band Black Country, New Road have announced their second full-length release, Ants From Up There, to be released on 4 February 2022. Alongside the announcement is the arrival of the LP’s first single, Chaos Space Marine.

The release will come almost exactly a year after the group’s debut, For The First Time. This album arrived off the back of a large live following and the single Sunglasses, and landed amidst high critical praise, including a nomination for the Mercury Prize.
Ants From Up There was recorded at Chale Abbey Studios, Isle Of Wight, with the help of their long-time live engineer Sergio Maschetzko. Bassist Tyler Hyde said of the album’s recording: “We were just so hyped the whole time,” says Hyde. “It was such a pleasure to make. I’ve kind of accepted that this might be the best thing that I’m ever part of for the rest of my life. And that’s fine.”
Chaos Space Marine will be familiar to fans of the band, being a live staple of their set. Frontman Isaac Wood called it: “the best song we’ve ever written,” explaining that: “We threw in every idea anyone had with that song. So the making of it was a really fast, whimsical approach – like throwing all the shit at the wall and just letting everything stick.”
Take a listen to the new track below.

Ants From Up There can be preordered here.
The post Black Country, New Road announce new album Ants From Up There, hear first single Chaos Space Marine appeared first on Guitar.com | All Things Guitar.