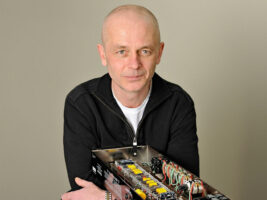 The co-founder of Blackstar Amplification, Bruce Keir, has died at the age of 60. Keir formed Blackstar in 2007, alongside Ian Robinson, Paul Hayhoe and Richard Frost.
Keir was born in 1961 in Singapore, the son of a BBC radio engineer. He grew up in a BBC World News relay station, his interest in electronics sparked by his environment and tinkering with discarded radio components.
After graduating from Salford University, Keir began work at Marshall. He started out as a Design Engineer before eventually becoming Chief Engineer and then Design Director across the 1980s and 1990s.
At Marshall, he met Robinson, Hayhoe and Frost, with whom he formed Blackstar in 2007. He designed all the original Blackstar product lineup, including the Artisan, Series One and HT Pedals. He also designed the digital algorithms that form the basis of the ID:Series amplifiers.
Blackstar revealed in a statement that Keir had been ill for some time, suffering from a form of early-onset Alzheimer’s disease. The statement also says: “As well as business partner and mentor, Bruce was also a very close friend and played bass in a band with the founding Blackstar team (including Marketing Director Joel Richardson) for years.
Over the years, Bruce has been an inspiration to many, many people and those who met him will remember the warmth, humour and gravitas of a truly unique individual. Blackstar will make sure his legacy is remembered, protected and strengthened.”
His family and colleagues have requested that those who wish to pay their respects donate to the Alzheimer’s society, and have set up a just giving page here.
The post Blackstar Amplification co-founder Bruce Keir dies aged 60 appeared first on Guitar.com | All Things Guitar.