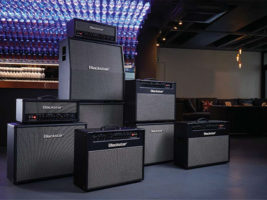 Following three years market research and development, UK amp specialist Blackstar has announced what it is calling the next generation of its highly successful HT Venue range, to be called HT Venue Mk II.

‘The mission was “simple”: improve on the sonic references of the best vintage and new valve amps on the planet, in the way Blackstar is renowned for and combine the sounds into a cohesive, creative product,’ Blackstar says.
The MK II models feature new clean channel ‘offering the ultimate in clean tone quality and flexibility’. All Clean Channels now have Bass, Treble and a Voice switch. They also offer what the maker describes as richer, responsive overdrives. Describing the ‘Voice’ switch, Blackstar says: ‘The high gain Voices are tight and focused, drawing on the original award-winning HT Venue Series’.
The range now offers an optional five-way FS-14 Footcontroller, a switchable power reduction circuit giving attenuation down to 10% of the amp’s rated power. Also offered is a USB recording output. Other features include a footswitchable boost on all channels (using the optional Footcontroller), XLR recording DI output and a newly designed in-house reverb.
The new range comprises the HT Club 40 Mk II, Club 60 112 Mk II, Stage 60 212 Mk II, HT Club 60 Mk II, and the Stage 100 Mk II. In addition to the optional footcontroller there will four new extension cabinets available.