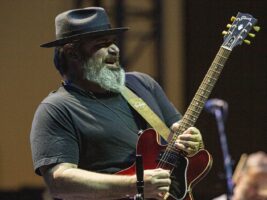 READ MORE: How to play blues like Joe Bonamassa

The band met with the accident while travelling to Rochester, Minnesota for a gig today (August 20) with Southern soul-rock band JJ Grey & Mofro as part of their co-headlining tour of the United States’ midwest and east coast.
“This morning our tour bus went off the road and crossed the median,” the band revealed in a Facebook post.
“Thankfully we are all safe and have only sustained minor injuries. Our sincere gratitude to the Winona MN, Police Department and Rescue Crew for their help getting us safely off the highway and out of oncoming traffic.”
The Minnesota State Patrol said Blues Travelers’ bus went off course and into a ditch at approximately 6.30am, local news CBS Minnesota reported. No other vehicles were involved.
The band and their crew were trapped in the bus before the police and first responders arrived, Variety reported. Of the 11 people in the bus, guitarist Chan Kinchla, drummer Brendan Hill, bassist Tad Kinchla and keyboardist Ben Wilson avoided injuries, according to local radio outlet KROC via Celebrity Access.
Blues Traveler frontman and harmonica player John Popper also gave fans something of a blow-by-blow account on the accident of his own personal Facebook account. He first wrote, “Bus just crashed!! Dunno what’s going on everything hurts… I think we’re stuck on the bus we’re all going to get checked but we’re still trying to get fucking door open… more later.”
Hours later, after reassuring fans with some good news from the emergency room, Popper wrote a longer note on his Facebook wall about how “banged up” Blues Traveler was due to the “scary” bus accident.
While Popper had suffered no “internal bleeding” and was “largely fine”, he explained that he was “beat to shit” and “still covered in shattered glass”. He added, “Everything hurts right now and my vast experience in auto accidents tells me it’s gonna hurt worse tomorrow and the day after too. So let’s see how I do with some sleep.”
According to Popper, Mateo Rodriquez, the band’s monitor engineer, suffered a “dislocated shoulder”. He also thanked his fans for their “outpouring of love and prayers”.

Hi…I am largely fine just beat to shit…I love U all so much for this ourpouring of love&prayers…several of us are…
Posted by John Popper on Thursday, August 19, 2021

“The band and crew are shaken but are safe,” Blues Traveler added in a statement to Variety. They plan to perform as scheduled in Rochester today.
The long-running band are touring in support of their latest album Traveler’s Blues, released last month.
Find more information on Blues Traveler’s tour here.
The post Blues Traveler members “shaken but safe” after tour bus crash in Minnesota appeared first on Guitar.com | All Things Guitar.