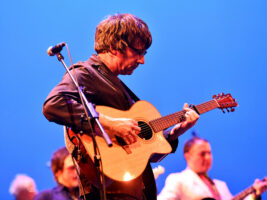 Blur’s Graham Coxon says he would encourage an Oasis reunion: “Knock those brothers’ heads together”

Blur guitarist Graham Coxon has said he would encourage an Oasis reunion, arguing that the Gallagher brothers should put their differences aside.

With the live return of bands like Pulp, fans of Britpop may well be fantasising about reunions from both Blur and Oasis, and Coxon has cleared up his views on both situations.
Speaking to Evening Standard, when asked about rumours of a Blur tour next year he said, “No, I don’t know what’s going on with Blur, we haven’t really talked about anything. I don’t really know what it is. It’s actually quite important that I say nothing about it for personal reasons.”
Although no tour has been confirmed to be on the cards, he did say he “hopes” there will be a reunion eventually. And on the topic of reunions, he added, “Just need Oasis to do it. Knock those brothers’ heads together.”
When asked if he’d be up for encouraging them and making peace with the band Blur once famously feuded with he replied, “Yes, any day. I’d do that. I’d have a chat with them.”
In a fan-led interview back in May, Liam Gallagher was asked if he would give his brother Noel a kidney if he needed it, he said, “Of course I would. He’s my brother, man, and I love him. I’d give you one as well, mate. Do I think he’d give me one of his? Yeah. He’s all bravado,” before later adding that he felt his sibling and his celebrity friends were “up their own arses”.
Gibson released a signature Noel Gallagher ES-355 model in an extremely-limited run. Models then ended up being sold on by scalpers for five grand over the original price.
The post Blur’s Graham Coxon says he would encourage an Oasis reunion: “Knock those brothers’ heads together” appeared first on Guitar.com | All Things Guitar.