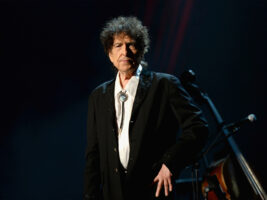 Bob Dylan has a new book coming out titled, The Philosophy Of Modern Song, which will be the folk icon’s first collection of writing since 2004’s Chronicles: Volume One.

READ MORE: The story of Willie Nelson’s Trigger, the most famous acoustic in the world

Due out 8 November through Simon & Schuster, The Philosophy Of Modern Song comprises 60 essays Dylan penned about the songs of other musicians, including the likes of Nina Simone, Hank Williams, Elvis Costello and Stephen Foster.
Dylan completed the work over a 10-year period, according to a press release. “[It] analyzes what [Dylan] calls the trap of easy rhymes, breaks down how the addition of a single syllable can diminish a song, and even explains how bluegrass relates to heavy metal,” wrote a statement.
Image: Simon & Schuster
Jonathan Karp, the president and CEO of Simon & Schuster, commented on The Philosophy Of Modern Song in a statement: “The publication of Bob Dylan’s kaleidoscopically brilliant work will be an international celebration of songs by one of the greatest artists of our time.
The Philosophy of Modern Song could only have been written by Bob Dylan. His voice is unique, and his work conveys his deep appreciation and understanding of songs, the people who bring those songs to life, and what songs mean to all of us.”
The Philosophy Of Modern Song will hopefully be enough to tide fans over while they await a follow-up to the autobiographical Chronicles: Volume One. No word yet on when – if ever – the sequel to the critically acclaimed book will be released.
Dylan’s last album, Rough And Rowdy Ways, released in June 2020. The 39th album of the folk icon, it arrived some eight years since his last collection of original songs in 2012’s Tempest.
The post Bob Dylan announces first book in nearly 18 years, The Philosophy Of Modern Song appeared first on Guitar.com | All Things Guitar.