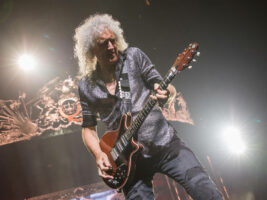 Brian May details COVID-19 experience, urges fans to get vaccinated

Queen guitarist Brian May has shared his experience with COVID-19, after he tested positive for it after attending a party. He has also urged his fans to get vaccinated.

READ MORE: Brian May says his recent comments on trans people were “twisted” by the press: “I was ambushed and completely stitched up”

In a video posted to Instagram, the 74-year-old guitarist stated that he had been taking a lot of precautions across the pandemic, having lived a “hermit-like life” for the majority of the last two years. However, he revealed that he and his wife had embarked on a rare outing over last weekend, likely catching the virus at a party despite the precautions he had taken.
“Last Saturday, we decided we would go to a birthday lunch,” he says. “We thought, ‘Ah, this is the last social function that we will go to – not that we go to many anyway. We’ll chance it. Everybody’s triple-jabbed. Everybody’s gonna be with one of these things which says you’re negative on the morning of – a lateral flow test. So it seemed to be set up very safely, but of course, you kind of know you’re taking a risk.”
However, despite the negative lateral flow tests produced beforehand, he then tested positive for the disease. May added that he suffered “two horrendous days… the worst flu you can imagine.” He’s still quarantining, and has reported that he’s doing a lot better – but he stated that his slightly rough two days could have been a lot worse if he had not been vaccinated.
“I can’t emphasise to you enough: This is not the response my body would have made on its own,” he said. “It’s making this response because I’ve had three Pfizer jabs. And I beg you and implore you to go get jabbed if you’re not already – ‘cause you need the help. I lost one of my very best friends to COVID very early on – in six days, it killed him. It could have done me the last six days, but it didn’t because of the jabs.
“And I despair seeing these people protesting against the vaccine, protesting against their rights being violated because they might have to wear a mask,” he added. “Jesus Christ, guys. Our parents fought through wars and had their civil rights kind of knocked away. All anyone’s asking is for you to play your part to try and unite against this invader – and it’s a nasty thing, and it isn’t finished yet.”
The post Brian May details COVID-19 experience, urges fans to get vaccinated appeared first on Guitar.com | All Things Guitar.