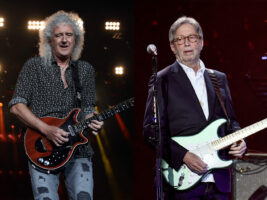 Brian May rebukes Eric Clapton’s anti-vax stance: “He’s my hero, but he has very different views from me”

Brian May has criticised Eric Clapton’s anti-vaccination stance, labelling people opposed to vaccines as “fruitcakes”.
READ MORE: “There’s a lot of nice nostalgia there”: Brian May celebrates 50 years of Queen by taking us through his personal photo album… in 3D!
The Queen guitarist was speaking about Clapton’s refusal to perform at venues restricting audiences to those with proof of vaccination against COVID-19. “I love Eric Clapton, he’s my hero, but he has very different views from me in many ways,” May told the Independent.
“He’s a person who thinks it’s OK to shoot animals for fun, so we have our disagreements, but I would never stop respecting the man,” he said.
“Anti-vax people, I’m sorry, I think they’re fruitcakes. There’s plenty of evidence to show that vaccination helps.”
“On the whole [vaccines] have been very safe. There’s always going to be some side effect in any drug you take, but to go around saying vaccines are a plot to kill you, I’m sorry, that goes in the fruitcake jar for me.”
May isn’t the first person to admonish Clapton on his anti-vaccination stance. In July, Eddie Van Halen’s ex-wife and Wolfgang Van Halen’s mother, the actress Valerie Bertinelli, responded to the same news about Clapton’s refusal to play gigs that required proof of vaccination for entry with a terse: “Once a dick, always a dick.”
Many anti-vax theories that have spread online – such as how the vaccine makes people ‘magnetic’ or how mRNA vaccines ‘change’ the patient’s DNA – are considered by many governments and medical professionals as dangerous falsehoods.
Clapton will be embarking on an eight-date US tour this September that kicks off at the Dickies Arena in Fort Worth, Texas and closes at the Seminole Hard Rock Hotel & Casino in Hollywood, Florida.
In May 2022, he’s scheduled to play two nights at London’s Royal Albert Hall.
Earlier this year, Clapton described suffering “severe reactions” to receiving the AstraZeneca vaccine, saying his “hands and feet were either frozen, numb or burning” and that feared he “would never play again”.
The post Brian May rebukes Eric Clapton’s anti-vax stance: “He’s my hero, but he has very different views from me” appeared first on Guitar.com | All Things Guitar.