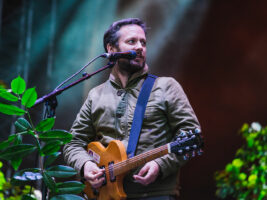 British Sea Power have dropped “British” from their name to steer clear of what they’ve called connotations of “antagonistic nationalism”.

A statement from the the indie-rock band’s website explained that they chose their original name to reference the “elementary power of the oceans”; the mention of the British navy was a bit of “wry humour” thrown in.
“The idea of British sea power in the historical sense was an obsolete thing. It was now just the name of a rock band,” they wrote. “Now, 20 years later, we’re recasting the name. In recent times there’s been a rise in a certain kind of nationalism in this world – an isolationist, antagonistic nationalism that we don’t want to run any risk of being confused with.”
Under the new name, Sea Power, the group have also announced next latest studio album, Everything Was Forever, due out 11 February 2022.
Sea Power have released the first single, Two Fingers, off their upcoming album. It marks the band’s first new music in four years, following their 2017 LP Let The Dancers Inherit The Party.

See the tracklist for Everything Was Forever below: