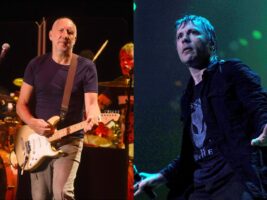 Bruce Dickinson has shared the advice he was given by Pete Townshend regarding the “corrupt” and “abusive” power that rockstars can have over their fans.

READ MORE: Peter Frampton To Perform His Final Shows Seated: “I Have Progressed In My Disease”

Speaking with Dr. Kevin Dutton on the Psycho Schizo Espresso podcast last week, the Iron Maiden frontman discussed the ‘scary realisation’ he had when he became a rock musician.
Detailing his thoughts on the often-controversial behaviour of musicians in the rock scene, the vocalist admitted that, although his band have previously engaged in activities with groupies, he is often concerned about the “undercurrent of abuse” that the dynamic can lead to.
“We all had girlfriends and sometimes you had girlfriends who were temporary girlfriends… but I don’t like it when there’s this undercurrent of abuse,” he explains. “You think they want to sleep with you because […] it might be nice and because they like you. Often that’s true [but] there are some people that want you as a notch on the bedpost… we’ve all been guilty of it, no doubt.”
He continues, saying that it was The Who guitarist that made him realise how quickly the seemingly-harmless situation can become far more severe, and warned him of the ‘manipulative’ power that rockstars can use to exploit fans.
“It was Pete Townshend, who knows a bit about abuse, I think, because he underwent quite a lot of it. It clicked for me – he said, ‘The big moment is when you realise that you can manipulate people because of who you are.’”
“When you first start out, you don’t have any realisation that people might want to sleep with you because you’re onstage. But there comes a point, which is incredibly corrupting and corrosive, in which you suddenly go, ‘Hang on a minute. You can actually kind of click your fingers and make things happen.’ That’s a really scary moment, to realise that that power exists.”
He progresses, later explaining that this power, when exploited by those who possess it, is what leads to elaborate examples of abuse in Hollywood.
“That’s why Harvey Weinstein [was able to have so much influence over people], that’s when it becomes really corrupting. It’s the same thing for actors as well… and then when you throw in a bucket of mood-altering drugs into the equation, then the wheels really come off the bus.”
The post Bruce Dickinson recalls Pete Townshend’s advice on ‘abusive’ power rockstars have over fans appeared first on Guitar.com | All Things Guitar.