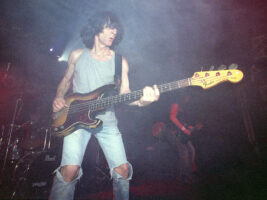 Burke Shelley, vocalist and bassist of Budgie, has died at the age of 71

Burke Shelley, vocalist and bassist for the influential Welsh heavy metal band Budgie has died at the age of 71.
The news was shared yesterday (10 January) by his daughter Ela. She wrote in a Facebook post on the Budge fan page: “It is with great sadness that I announce the death of my father, John Burke Shelley. He passed away this evening in his sleep at Heath Hospital in Cardiff, his birth town. He was 71 years old. Please respect the family during this time. With love, His four children: Ela, Osian, Dimitri and Nathaniel.”
Budgie were formed in Cardiff in 1967. They gigged locally for a few years before releasing their debut self-titled record in 1971, produced by Rodger Bain, who had just recently worked on Black Sabbath’s self-titled and Paranoid. Budgie proceeded to record an album every year until 1976, developing their sound into an eclectic mix of blues-infused hard rock, traditional heavy metal and expansive progressive rock.
Budgie broke up in 1987, before a short reunion in 1995, and a longer return to recording and touring between 1999 and 2010. Their last album, You’re All Living In Cuckoo Land, was released in 2006.
A number of artists have cited Budgie as a major influence, including Iron Maiden, Queens Of The Stone Age, Megadeth, Soundgarden and Melvins. Metallica notably covered the Budgie track Breadfan in 1988, released as a B-side on the Harvester Of Sorrow single, reappearing on the covers compilation Garage Inc. in 1998.
In 2020, Shelley revealed that he was suffering from an aortic aneurysm, as well as the underlying genetic condition Stickler Syndrome. He told Wales Online at the time that he had turned down surgery for his aortic aneurysm, as it carried the risk of irreparable spinal damage. “I want to live what life I have left and not be crippled,” he said. “I’ve got faith in God and have no worries about where I’m going. So I’ll just go when He decides to take me and, in the meantime, I’ll carry on doing what I want to do. Simple as that.”
The post Burke Shelley, vocalist and bassist of Budgie, has died at the age of 71 appeared first on Guitar.com | All Things Guitar.