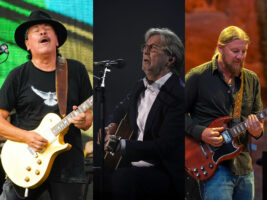 Carlos Santana has hinted at the nature of his next album, a score for an imaginary spaghetti western in the vein of Ennio Morricone, being made in collaboration with guitarists Eric Clapton and Derek Trucks.

In a new interview, GuitarWorld asked Santana whether he’s always writing songs and exploring new ideas, or if he only enters the creative space when a project spurs him on.
“I believe it’s important to constantly expand, expand and expand,” Santana replied, “by always creating and challenging myself. I’m looking forward, at the moment, to creating an album that is purely instrumental.”
He noted that this instrumental project will contrast to his recently released album Blessings And Miracles when it comes to accessibility. “Nothing will be geared up to radio or radio-friendly commerciality,” he explained. “In a way, I’m picturing something like a soundtrack, perhaps in the vein of an Ennio Morricone score for an imaginary spaghetti western – The Good, the Bad and the Ugly, that kind of thing, you know?
“I talked about this with Eric Clapton and Derek Trucks, and that is something we will be working on together in the near future. We aren’t going to be concerned about songs; it will be more about moods.” No other details about the project were revealed by Santana.
Despite the controversy he has recently been mired in, with his anti-vaccine advocacy and the reemergence of his 1976 racist rant, Clapton remains an in-demand guitar player. Alongside the prospective project with Santana, he’s also contributed to Ozzy Osbourne’s new album, and has headed out on the road for a new tour.
The post Carlos Santana is working on a score for an imaginary film with Eric Clapton and Derek Trucks appeared first on Guitar.com | All Things Guitar.