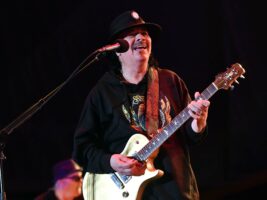 Carlos Santana has cancelled his December residency dates in Las Vegas to undergo an “unscheduled heart procedure”.
Santana was scheduled to perform eight shows at the House Of Blues at the Mandalay Bay Resort and Casino before his hospitalisation on Saturday (27 November). The 74-year-old guitarist posted a video statement to inform fans of his medical condition and of his intention to return to the stage.
“Just wanted to share with you some clarity with specificity what’s been going on with my physicality,” Santana said in the video. “There’s been rumours flying around here and there about this and that. So, I’m here to just crystallise and make it clear. Last Saturday I had an incident where I asked my wife Cindy to take me to the hospital ’cause I had this thing happening in my chest.”
“So, when we went there we found out that I needed to take care of it,” he added. “So I am, and so I’m going to be taking time out for a little bit to make sure I replenish and I rest and catch up with my health so that when I play for you I would play the way I’m used to and give you 150 per cent. I wouldn’t show up unless I can do that.”

In October, Santana announced an extension of his residency at the House Of Blues through to May 2022. Tickets on the guitar legend’s website now show all December shows to be cancelled, though tickets for January and beyond are still available to purchase.
The post Carlos Santana undergoes “unscheduled heart procedure” and cancels December Las Vegas dates appeared first on Guitar.com | All Things Guitar.