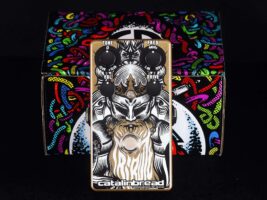 Catalinbread has released its new overdrive pedal, the Tribute.

The all-gain parametric pedal, which has been coined as “the overdrive built for every guitarist”, combines a high headroom drive engine with flexible tone control.
It also boasts the standard set of controls in a 3-controller layout consisting of volume, drive and tone. While there is only one frequency control, it can be used to sweep frequency between 1.4 kHz and 70Hz.
The pedal offers one-band parametric EQ with 12 dB of cut and boost, allowing for full tone control and the option to dial in low mids to boost the band and produce heavier chords or even push the higher mids for solos.
The drive itself offers a pure clean boost, with the back end of the Tribute paying homage to one of Catalinbread’s oldest designs, the VariOboost.
You can watch JayLeonardJ’s demo of the Tribute below:

The Tribute circuit design also uses an internal charge pump which boosts the headroom to +18V from the standard 9V input.
Catalinbread in a statement have said: “I originally built the  ‘rough draft’ of this pedal for my dear friend Tom Keithly years ago. As good as it was, it wasn’t perfect. When it came time to design the Tribute, I thought ‘we have so many pedals that sound like other amps, but what about your amp?’
“I got hold of the prototype and took it back to the drawing board, stripped it down to a component level and markedly improved every aspect of it in an organic and agonizingly pedantic way”
This new pedal follows the release of the Many Worlds flexible phaser pedal that was released earlier last month.
The Tribute is available for purchase now at $179.99
Visit catalinbread.com for more information.
The post Catalinbread releases new overdrive pedal: the Tribute appeared first on Guitar.com | All Things Guitar.