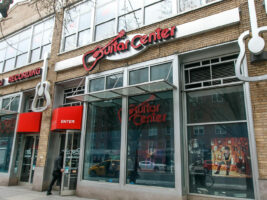 Chattanooga man causes disturbance at local Guitar Center, says he is “too high” to play quietly

A Chattanooga man caused the police to be called to the city’s Guitar Center on Wednesday (22 September). He entered the store and began playing various instruments “aggressively.” When asked to tone it down by an employee, he simply stated that he was “too high” to not play incredibly loudly.

According to The Chattanoogan, police responded to the scene after a verbal altercation broke out between the man and the employee who attempted to calm the situation down. The local police blotter notes that after he revealed he was “too high”, the man was asked to leave. While the police were contacted with a view to ejecting the man from the premises, he had done so himself by the time they arrived.
The report fails to mention whether the man played Smoke On The Water, or if he gave an indication of what he was “too high” on. Given, however, he was playing far too loudly through an intoxicated haze, he might be a great fit for a doom metal band, if you’re in the area looking to form one.
The idea of playing far too loudly in a guitar shop has been a cultural touchstone for decades. Jokes about the overabundance of certain riffs and obnoxious guitarists who show off their sweep arpeggios at full volume to an audience who are really just trying to purchase strings date back until at least 1992, peaking, of course, with Wayne’s World’s iconic “No Stairway” scene.
Regardless of real-life incidents such as the above, the jokes persist. Recently, late-night talk show host Jimmy Fallon drew the ire of the experimental music world for featuring The Peter Brötzmann Sextet’s excellent free jazz album Nipples on his Do Not Play segment. Tittering at the album title, Fallon compared the sounds of free jazz to a “Guitar Center on a busy Saturday.”
Brötzmann himself responded to the odd criticism in an email to Rolling Stone, saying: “We both know that the world is full of ignorants and stupidos, one more or less, who cares.”
The post Chattanooga man causes disturbance at local Guitar Center, says he is “too high” to play quietly appeared first on Guitar.com | All Things Guitar.