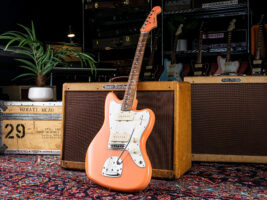 Chicago Music Exchange has unveiled its first original Fender colourway, Pacific Peach. Inspired by vintage kitchen appliances and the classic car culture of Southern California, Pacific Peach appears on the CME Exclusive Player Jazzmaster.
Available now for $874.99, the impressively spec’d instrument comes equipped with USA-made Pure Vintage ’65 pickups, series/parallel four-way switching, a matching headcap and pre-routed rhythm circuit cavity for aftermarket mods.
“It really was a dream to be part of something like this,” says CME’s Director of New Product Dan Bordonaro, who collaborated with Fender to create the new finish.
“It started several years ago visiting Fender’s office in Hollywood,” he tells us. “I remember just walking by a pile of unassuming paint samples on a shelf. There was a salmon colour that I just loved, but, if I remember correctly, it wasn’t an approved colour yet. In my mind, I truly can’t remember how similar that was to where we are today, but I know that’s where this starts. And honestly, at that time, CME just wasn’t in a position to buy enough guitars to justify Fender mixing a special colour just for us.
The CME Exclusive Player Jazzmaster features USA-made Pure Vintage ’65 pickups.
“Over the next couple years, CME was growing and I just kept noticing coral and salmon colours on products everywhere, and just fell in love with it. In 2018, I landed on photos of this old early 1960s Ford Galaxie 500 in Samoan Coral. I sent those photos to my contacts at Fender, and that became the dream. In some lights, it’s peachy and leaning orange. In others, it’s pinker like salmon. It wasn’t really metallic, but it really moved with the light and I fell in love.”
Samoan Coral ended up acting as the codename for the new colour in the development process. Then further inspiration came courtesy of a kitchen appliance.
Pacific Peach next to a Shell Pink CME Exclusive Player Jazzmaster (right) for comparison.
“That same year, KitchenAid released a limited edition colour of the year series in Bird Of Paradise,” says Dan. “Obviously I bought the stand mixer! I think the KitchenAid colour ended up being the most accurate inspiration for Pacific Peach. Then, in 2019, the Pantone colour of the year was Living Coral and so that’s a huge deal for fashion, and it just reinforced our obsession with leaning into a colour like this.
“Fender already had Tahitian Coral and Fiesta Red but they’re too red to hit this mark. And Shell Pink was too pink. It needed to live perfectly in the middle. Over the last couple years, I’ve requested it on custom builds with Fender Custom Shop and also with Kauer Guitars, which were beautiful. But of course, custom guitars are expensive and simply out for most of us, present company included. We even did something similar on some special batches of Reverend Double Agent OG models which are gorgeous, but all along the goal was to put it on Fender models that everyone can afford. It just seems like it was made for a matching headcap Jazzmaster with those pre-CBS vibes.”
The Pacific Peach model features a matching headcap.
Dan says the R&D process involved “a good deal of video conferencing, Google image search link sending, screenshots back and forth, walking by something in a clothing or furniture store and texting a photo on the spot to Fender, and then eventually painted pieces of alder being shipped back and forth – all that good stuff!”
Then after three waves of paint swatches, they found the right hue. “We have a truly great relationship with Fender’s product development team in Hollywood,” Dan reveals. “So although this kind of work to validate new colours is a ton of time investment, they were hugely supportive the whole time.”
Though the pandemic pushed Pacific Peach’s original 2020 release date back by a year or so, here in late 2021, it’s finally ready to appear in-store.
Four-way switching offers series and parallel options.
“I don’t know if I realised it at that time, but looking back I know my goal was to make it feel like it came out of a time capsule,” says Dan. “A colour no-one ever knew existed. It’s a false narrative, but we like to pretend. And honestly, in the early 60s you have major automobile and appliance manufacturers using colours very similar to this. There’s no reason this couldn’t have happened at Fender, but to the best of our knowledge, it just didn’t. And so here we are in 2021, working with Fender to make it real.”
Pacific Peach will be appearing on more Fender models in 2022 but for now, the only place you can get it is on the CME Exclusive Fender Player Jazzmaster. Visit Chicago Music Exchange to order yours today.
Check out CME’s apt performance of The Presidents Of The United States Of America’s hit single Peaches below.