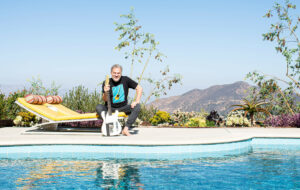 “Tweedy is really fucking funny.” We’re sat with Jeff Garlin in the living room of his Mullholland Drive home while the award-winning comedy actor and stand-up comedian is considering which of his many musician friends could make it as a professional comic. As well as revealing which other guitarists he finds funny, Garlin insists that Wilco frontman Jeff Tweedy has the chops to make it in the cutthroat world of stand-up comedy.

“When you listen to Wes Montgomery, Buddy Guy, Mike Bloomfield, any great guitarist… you can give them the cheapest bullcrap guitar and they are gonna make it sound gorgeous. I need all the help I can get! I need a well-made Gibson or Fender guitar to start with, or I’m screwed! If I work hard, can I be pretty good? You bet I can. Can I be better than pretty good? I don’t think so.”
A gorgeous Custom Telecaster from the Fender Custom Shop
Off the cuff
As a Chicagoan, Garlin feels strongly about keeping the blues alive, and he’s spoken in the past about the commonality between blues playing and improvisational comedy. “For my style of comedy, life has to bleed into the art. But the thing about it is, out of the blues comes music that makes you smile. And, out of my blues, comes comedy that hopefully makes you laugh. It’s the same thing, it’s taking this difficult thing – the pain of life – and making it funny.”

Which brings us back to Jeff Tweedy. “Jeff is a friend of mine, I love the guy,” says Garlin. “I was helping him to write some stuff for his solo tour once, and then at a certain point as we’re talking I’m going, ‘You’re funny as yourself, just go up and be funny. I don’t need to be helping you write stuff’. And he is that funny. He gets big laughs when he goes up there.”
“A lot of comedians would like to be rock stars – and a lot of rock stars would like to be comedians”
The Wilco star isn’t the only serious musician who makes Garlin laugh. “Here’s somebody – and I don’t care if I’m outing him – Jonny Greenwood. He’s got a great sense of humour. What is Jonny Greenwood’s passion? He loves comedy, the history of comedy. Now there’s a guy who you see onstage and you think, ‘Eh, he doesn’t like comedy.’ But he loves comedy. He loves comedy! Laurel & Hardy? Doesn’t fucking matter. The dude loves comedy. Jack White – another one who loves comedy and you wouldn’t think it. He’s a funny dude, we share laughs, he’s funny. John Mayer? I’m sure he’d like to take a year and switch and be a comedian. He’s got a great sense of humour.

“I get to know all these musicians because they love Curb Your Enthusiasm,” Garlin reveals. “It’s the beginning conversation in all my relationships with musicians. From Ben Folds to Radiohead, Wilco, Joe Bonamassa and more. A lot of comedians would like to be rock stars, and a lot of rock stars would like to be comedians. But the only one I’ve seen where I could work with them and they could really be a stand-up is Tweedy. Tweedy can tell stories, there’s a certain little twinkle in his eye… he’s got the richest sense of humour.”
Season 11 of Curb Your Enthusiasm is out now on HBO. To see the full inventory of Jeff Garlin’s charity guitar sale, visit reverb.com/shop/jeffs-gear-depot-40. Head to jeffgarlin.com for information on his upcoming shows.
The post Curb Your Enthusiasm’s Jeff Garlin has too many guitars appeared first on Guitar.com | All Things Guitar.