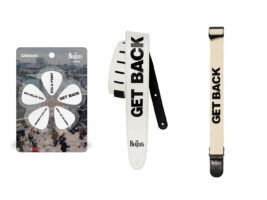 In celebration of the launch of Peter Jackson’s documentary The Beatles: Get Back, D’Addario has announced a collection of Get Back-themed guitar picks and straps.

READ MORE: Peter Jackson says his Beatles docuseries will be “far more intimate” than fans are used to

The limited-edition accessories themselves bear a black-on-white aesthetic. The range consists of a screen-printed cotton strap, a printed vegan vinyl strap, and a 10-pack of celluloid picks printed with a song title from the rooftop setlist. The picks are available in light, medium, and heavy gauges.
The cotton strap lists for $46.05, the vinyl strap for $63.25 and each pack of picks for $11.85.
The Beatles: Get Back will be presented as three separate episodes on the Disney+ streaming service, across 25, 26 and 27 November. Each episode is approximately two hours in length.
“In many respects, Michael Lindsay-Hogg’s remarkable footage captured multiple storylines,” Jackson said of the film. “The story of friends and of individuals. It is the story of human frailties and of a divine partnership. It is a detailed account of the creative process, with the crafting of iconic songs under pressure, set amid the social climate of early 1969. But it’s not nostalgia – it’s raw, honest, and human. Over six hours, you’ll get to know The Beatles with an intimacy that you never thought possible.”
Find out more about the new accessories at daddario.com.
The post D’Addario announces collection of Get Back-themed accessories to celebrate Peter Jackson Beatles documentary appeared first on Guitar.com | All Things Guitar.