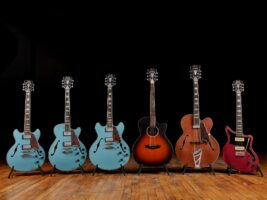 D’Angelico Guitars has added two new electric guitar models to its line-up for 2022, introducing the Premier Bedford and Premier EXL-1.

The New York City-based guitar company also has new finish options available for its electric and acoustic models – but before we jump into those, here’s what we know about the two new electrics…
D’Angelico Premier Bedford
The Premier Bedford is an offset model that comes with two body styles: mahogany with a Sky Blue finish, or basswood in either Black Flake or Oxblood. The guitar also features a maple neck with a C-shape profile, a 22-fret ovangkol fingerboard and that wonderfully vintage signature D’Angelico headstock.
There are two Seymour Duncan P90 pickups which route to independent volume and tone knobs, as well as a three-way pickup selector. Other hardware appointments include Grover Rotomatic tuners and a six-point vibrato bridge.
Image: D’angelico Guitars
Lists for $849.
D’Angelico Premier EXL-1
An archtop model which would likely appeal to jazz players, the Premier EXL-1 features a laminated spruce top with flame maple back and sides, and f-holes as well. It, too, features a maple neck with a C-shape profile and an ovangkol fingerboard with 22 frets.
The guitar stars a floating Duncan-designed mini-humbucker in its neck position – which routes to a single volume and tone knob. Other hardware features include Grover Rotomatic tuners and a ovangkol bridge.

Lists for $999.
New finishes
As well as the two new models, D’angelico’s Premier SS, DC and Mini DC electric guitars now come in a fresh new Sky Blue finish that should appeal to those who are fans of softer, pastel shades.
Image: D’angelico
Meanwhile, the Premier LS Acoustic guitars – including the Tammany, Gramercy, Lexington, Bowery and Fulton – all get a new Satin Vintage Sunburst finish.
Image: D’angelico
Learn more at dangelicoguitars.com
The post D’Angelico introduces the Premier Bedford and Premier EX-1 electric guitars for 2022 appeared first on Guitar.com | All Things Guitar.