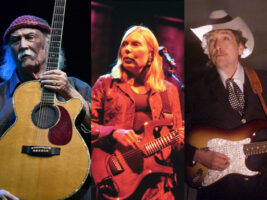 David Crosby has expressed his opinion that Joni Mitchell is just as good a lyricist, and “10 times the musician and singer” when compared to her fellow legendary singer-songwriter Bob Dylan.

READ MORE: David Crosby says he let the rest of CSNY down “by becoming a junkie”

Speaking to Howard Stern, Crosby was asked about his past relationship with Mitchell. “I’m sad when you say you don’t get along with Joni,” said Stern. “I understand you guys were boyfriend and girlfriend for a while, you broke up, that happens to lots of people.”
Crosby opined that the end of their relationship was inevitable: “Joni was so talented that I think it would’ve happened anyway. It wasn’t like I had a choice, man, she was so good, I couldn’t ignore it. She is arguably the best singer-songwriter of our times.
“She’s as good a poet as Bob [Dylan], and she’s 10 times the musician and singer than he is. I care about him, but the truth is she’s much better as a musician and much better as a singer.
He said that despite their frayed personal relationship now, he still has respect for Mitchell and her body of work: “I don’t get along with her that well anymore, but I do love her with my whole heart for what she’s given us. I don’t think anybody did it as well. They’ve been celebrating Blue because it’s 50 years since she’s made it. I think that’s arguably the best singer-songwriter record ever made, much better than my stuff.”
Stern then asked Crosby: “Do you think it’s hard to date a woman like that when you have such respect for her talent?”
He responded: “Do I think it’s hard? Listen, imagine if you wrote a song, a really good song, and you sang it to her when she came home, and then she sang you three better songs that she wrote last night.”
Crosby even recounted how the pair’s breakup saw him at the receiving end of Mitchell’s songwriting: “She came in and she was kind of different, she’s like, ‘I’ve got a new song,’ and we were all there, and we all said, ‘Oh, fantastic, a new Joni song, yay!’
“And she starts to sing it, and it’s plainly a goodbye to me. And then she sang it again, in case I didn’t get it the first time. Unbelievable. Everybody in the room was going, ‘Ooh..’ Everybody… It’s hysterically funny.”
Crosby’s new studio album, For Free, is named after the Joni Mitchell track, and will arrive on 23 July. The titular cover has arrived ahead of the release, and features guest vocals from Sarah Jarosz. You can hear it below.

The post David Crosby says Joni Mitchell is “10 times the musician and singer” Bob Dylan is appeared first on Guitar.com | All Things Guitar.