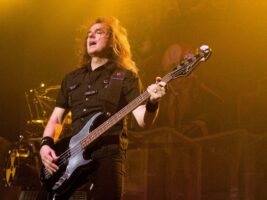 Ex-Megadeth bassist David Ellefson has described what it was like to pick himself back up following his abrupt departure from the iconic thrash band last year. Reflecting on the infamous incident, the musician stated that while many people deserted him when he reached his lowest point, he is gradually becoming more accustomed to the “ebbs and flows” that come with being a musician.

READ MORE: Dave Mustaine On How He Nearly Lost Control Of His Left Hand During Chemo: “I Wasn’t Going To Let Cancer Affect The Way I Played”

Talking as part of the Real Music With Gary Stuckey show last week (August 4), David Ellefson described how his life changed after he was fired from Megadeth for sexual misconduct last year.
“You find out who your friends aren’t pretty fucking quick when the shit hits the fan. Cause everybody wants to be around you when you’re picking up your Grammy,” he says. “You’re never on top all the time. Your life ebbs and flows [and] your career ebbs and flows. I’ve been fortunate enough to be a musician and I’ve had to go with the […] the good, the bad, and the otherwise.”

The musician went on to discuss how he is growing increasingly well-accustomed to these colossal highs and earth-shattering lows as his career progresses. Here, he says he first experienced this difficulty when the Seattle grunge scene emerged and went on to dominate the 1990s:
“Just when we thought everything was going awesome, Seattle music showed up. No one saw that coming. So there are all kinds of internal and external forces at work, and I think the trick is to be galvanized to be able to withstand the storms and come out the other side and still keep rocking.”
Looking forward, the bassist appears to have a more clear and optimistic outlook on his time in the music industry, saying the events he faced have forced him to reevaluate his priorities.
“Sometimes the success becomes the golden handcuffs, so you just have to make it work. Unfortunately, in those situations, what happens is you often start to compromise your own morality, your own beliefs, your own integrity. But when you’re in it to win it, you also have to put your big-boy pants on and realize it isn’t all gonna go your way,” he says. “I think that’s the hardest thing — is learning how to compromise and learning which battles are the ones that you wanna win and which hill it is that you’re willing to die on.”
Ellefson is currently about to partake in his Kings Of Thrash US tour with former Megadeth guitarist Jeff Young.
The post David Ellefson on Megadeth firing: “You find out who your friends aren’t pretty fucking quick when shit hits the fan” appeared first on Guitar.com | All Things Guitar.