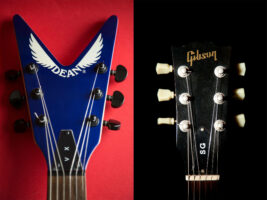 A jury has found that Dean is guilty of both trademark infringement and counterfeiting of Gibson’s body shapes, in an apparent win for Gibson in the two companies’ legal battle.

READ MORE: Legends, presidents and Back To The Future: witnesses and exhibits named ahead of Gibson vs Dean trial

The ruling filed today (27 May) comes at the end of a two-week long trial that saw hundreds of pieces of evidence admitted and several notable witnesses either take the stand or contribute via deposition.
The jury found that Dean infringed on Gibson’s body shape trademarks for the Flying V, Explorer and SG, as well as separate trademarks for the Dove Wing headstock and the hummingbird acoustic guitar. Dean was not found to have infringed on Gibson’s standalone trademark for the Flying V.
The jury also found that Dean marketed counterfeits of the Flying V, Explorer and SG body shapes, and the Gibson Hummingbird. It is not guilty of marketing a counterfeit of the Dove Wing headstock shape.
While these rulings are a victory for Gibson, the jury did find that Gibson delayed in
asserting its trademark right for the Flying V and Explorer body shapes, and the Dove Wing headstock shape. In all of these cases, this was ruled to have “caused undue prejudice” to both Dean and its investment partner Concordia.
Importantly, it was ruled that Gibson is owed $4,000 in “counterfeiting statutory damages per counterfeit trademark per type of goods sold, [or] offered for sale.”
None of Gibson’s trademarks were found to be generic enough to warrant cancellation, and so in the US at least Gibson retains trademarks for the Flying V body shape, the Explorer body shape, the ES body shape, and the SG body shape.
Gibson has released a press statement regarding the ruling, expressing satisfaction at the result. “The court’s decision by jury today, to uphold Gibson’s long-established and well-recognised trademarks for Gibson’s innovative and iconic guitar shapes is a win for Gibson and the music community at large,” it states. “The court found that the Gibson Trademarks are valid, the Gibson shapes are not generic, and the defendants were guilty of both infringement and counterfeiting. Gibson is very pleased with the outcome after years of simply trying to protect their brand and business through well-recognised intellectual property rights, rights that have been Gibson’s for decades.
“Gibson’s guitar shapes are iconic, and now are firmly protected for the past, present, and future. From a broader perspective, this court decision is also a win for Gibson Fans, Artists, Dealers, and related Partners who expect and deserve authenticity. Not to mention for all of the iconic American brands that have invested in meaningful innovation and continued protection, only to see it diluted with unauthorised and often illegitimate knockoffs. Gibson can now focus attention on continuing to leverage its iconic past, and invest in future innovation, with confidence.”
Guitar.com has contacted Dean for comment.
This is a developing story.
The post Dean guilty of trademark infringement and counterfeiting in Gibson Flying V case appeared first on Guitar.com | All Things Guitar.