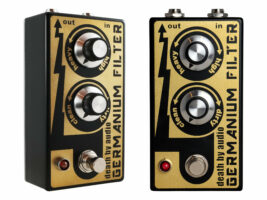 Pedal makers Death By Audio have launched a new pedal, the Germanium Filter. The two-knob stompbox, despite its utilitarian-sounding name, can impart a huge amount of filth onto your guitar tone.

The pedal, alongside being a filter, is described by DBA as a “console-style boost, fuzz, distortion and overdrive.” At its heart is a pair of new-old-stock germanium transistors, hand-matched according to Death By Audio’s own specifications.
Its controls are pretty simple. There’s a gain control (labelled clean-dirty) and a filter control (labelled heavy-high). At the lowest gain setting, the pedal functions as a dirty boost, adding in spluttering fuzz and distortion as you crank the knob. The filter control also dramatically adjusts your signal’s sound, with the lowest setting providing furniture-rattling sub-bass, and the highest setting providing a piercing treble boost.
Death By Audio founder Oliver Ackerman said in a press release: “I’m so psyched about the Germanium Filter. It sounds so good on everything all the time. I think everyone needs one on their pedalboard to give your tone that classic shine or to blast out the windows.”
Hear it in action below.

The pedal lists for $225. Find out more at deathbyaudio.com.
The post Death By Audio launches its new Germanium Filter, promising “true vintage distortion” appeared first on Guitar.com | All Things Guitar.