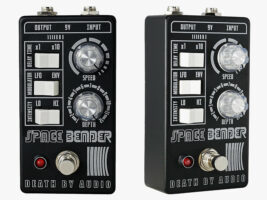 Death By Audio has introduced the Space Delay, a very Death By Audio spin on a modulation pedal featuring simple yet powerful controls and some rather intense sounds.

The pedal notably gives you control of the time of the delayed signal, something normally factored into the design of modulation pedals. A rocker switch lets you multiply its delay time by 10, leading to washed-out, modulated delay sounds.
There are also knobs for modulation speed and depth, both of which have huge ranges – going from ultra-slow sweeps to standing-under-a-helicopter, and subtle wobble to seasick pitch dives respectively.
Alongside the delay time rocker switch there’s also a switch to change between LFO- or envelope-based modulation, as well as an Intensity switch, which increases the feedback for an even more intense effect. And finally, internally you’ll find a trim pot to adjust the pedal’s output level if you want to use it to drive an amp or an overdrive harder.
Check it out in action with Death By Audio’s official demo below.

The Space Bender lists for $270. Find out more over at deathbyaudio.com.
The post Death By Audio’s new space bender is a modulation pedal from a dimension somewhere beyond linear time appeared first on Guitar.com | All Things Guitar.