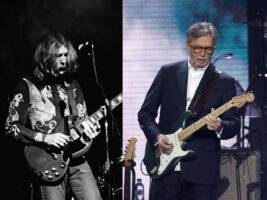 Derek Trucks: Eric Clapton’s slide playing is “precise”, while Duane Allman’s “sounded like it could totally flame out or go off the rails at any time”

Derek Trucks has spoken about the nuanced differences between the slide playing of Eric Clapton and Duane Allman. Both Clapton and Allman were members of Derek And The Dominoes, whose album Layla And Other Assorted Love Songs is the subject of the Tedeschi Trucks Band’s upcoming live LP, Layla Revisited.

While Duane Allman was best known for his slide playing, Clapton used a slide far less often. However, Layla And Other Assorted Love Songs does feature Clapton playing slide, such as on the song Anyday.
Speaking in an interview with MusicRadar, Derek Trucks (himself known for his spectacular slide playing) described the differences between the two blues virtuosos: “There are the obvious tone and sound differences just from what you are hearing from different instruments, but Eric definitely has a unique approach. I always loved him playing slide. He didn’t do it a whole lot, but on Motherless Children, or Anyday, there’s just a great feel to it. And it reminds me that, early on, before I knew what was what, I just assumed that was Duane when I was younger.”
He added: “I love hearing [Clapton’s] Strat with the slide. I just love hearing that approach. It’s a little more tucked in whereas Duane’s just sounded like it could totally flame out or go off the rails at any time. It was so wide open with the way he played, whereas Eric was very precise, which is cool to hear. But I love the sound of his slide playing.”
Layla Revisited (Live at LOCKN’) will be released on 16 July. The concert, recorded in 2019, is a full performance of Layla And Other Assorted Love Songs, and features special guest Trey Anastasio of Phish.
Derek Trucks explained the band’s choice to cover the album in full in a statement, saying: “By the time that I started playing guitar, the sound of Duane Allman’s slide was almost an obsession. His playing on Layla is still one of the high-water marks for me. The spirit, the joy, the recklessness, and the inevitability of it. My dad would play that record for me and my brother to fall asleep to and further sear it into my DNA.”
Videos for several tracks have been released ahead of the album’s arrival: check out the performance of Tell The Truth below.

The post Derek Trucks: Eric Clapton’s slide playing is “precise”, while Duane Allman’s “sounded like it could totally flame out or go off the rails at any time” appeared first on Guitar.com | All Things Guitar.