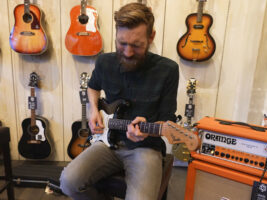 Last Friday (3 December), guitar YouTuber Paul Davids uploaded a video titled I PLAYED JIMI HENDRIX’ $10,000,000 GUITAR. The guitar the video showcases is ostensibly the black Stratocaster that Jimi Hendrix played at the 1967 Monterey Pop Festival. However, a number of factors can call into question the authenticity of the instrument.

Firstly, there is the case of the Heritage Auctions sale of this guitar. It was initially set to be sold by the auction house around the 50th anniversary of the Monterey Pop Festival show. However, not long after the auction was announced, the guitar was pulled from sale – a Heritage Auctions press statement revealed that “experts examined the instrument and cited concerns that it may not be the same guitar Hendrix played at Monterey.”

The concerns were grave enough, apparently, for Heritage to cancel the sale outright. Notably, when the guitar was sold at an earlier auction, no mention of any documents of provenance, signed or otherwise, was made. Instead, the lot description mentions “endless pictures” of the guitar from the Monterey footage – but this footage could cast even more doubt on the instrument’s authenticity.
The Monterey footage offers us a view of the back of the guitar. Comparing the guitar in the footage and the guitar in Davids’ video shows us that the pattern of damage has, of course, changed across 50 years. New dings have appeared, and the line of buckle rash has expanded – as would be expected if the guitar continued to be played. However, what’s harder to explain is the movement of the roughly circular chunk of missing finish near the back corner of the belly carve.
Hendrix performing Hey Joe at the Monterey Pop Festival. The circle of missing finish is shown to be on the sloped section of the belly carve, and closer to the edge of the guitar than it is shown to be in Davids’ video. Images: Vintage Blues In 4K via YouTube
As you can see in the above image, footage from the Monterey performance of Hey Joe shows the chunk of missing finish to be inside the line of the belly carve. The video footage makes this a little clearer – the movement of the guitar and the reflections on the finish show the outline of the belly carve more obviously. However, on the guitar shown in Davids’ video, the exposed wood is outside the line of the carve, further from the edge of the instrument. Take a look below:
Image: Paul Davids via YouTube
It’s possible that a combination of low-quality footage and odd reflections from stage lights explain this visual discrepancy. The guitar shown in Davids’ video has also been part of several museum exhibits about rock history, but no clearer provenance was brought about by these exhibitions. The story at present is that the guitar entered the collector’s market after being purchased from Hendrix’s US manager, Bob Levine.
These details do not call into question whether this instrument is or is not an actual Fender Stratocaster. It’s likely still a very valuable guitar – however, perhaps not quite as valuable as Davids’ video would have you believe. While Davids states that “estimates say that this guitar might bring in between seven and 10 million dollars.” This figure is a significant leap from the guitar’s previous sales: it fetched $200,000 at auction in 2012, and before it was pulled from Heritage Auctions it was estimated to fetch $750,000. It is not clear in the video where exactly this leap in value has come from.
The post Did Paul Davids really play Hendrix’s “$10,000,000” Monterey Stratocaster? appeared first on Guitar.com | All Things Guitar.