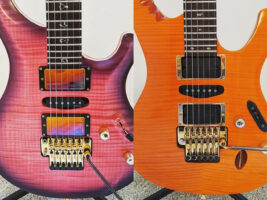 DragonForce guitarist Herman Li has shown off what appears to be a personal PRS custom electric, fitted with an Ibanez floating bridge.

READ MORE: “I wanted to do something that had elements of classic designs, but in a twisted way”: Dennis Fano of Novo Guitars

Li shared pictures of the guitar on his Instagram page yesterday (1 September), standing it side-by-side with his signature Ibanez EGEN18 electric. He captioned his post: “Herman 2021 vs Herman 2007. Which would you take and why?”
The PRS guitar comes fitted with the same Edge Zero double-locking system found on the EGEN18. If a PRS signature model for Li does ever hit stores, it’s unlikely it will feature the same bridge though.
Aside from that, the guitar has a HSH configuration, sporting two Fishman pickups with eye-popping iridescent covers and what appears to be a DiMarzio single-coil in the middle.
It also has a pink-purple burst finish atop a flamed maple top and gold hardware. What it does leave out from Li’s previous signature guitar is the Kung Fu grip in the upper horn of the body. Take a look below:

Some speculation has arisen as to whether Li is now endorsed by PRS. When a fan questioned if he is now a PRS artist or still a free agent, Li simply responded: “I am [a] guitar loving artist”.
The post DragonForce’s Herman Li teases a custom PRS with an Ibanez floating bridge appeared first on Guitar.com | All Things Guitar.