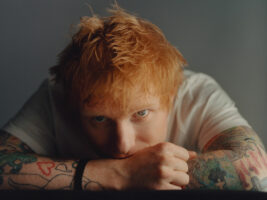 Ed Sheeran has announced his new record, =, will be released on 29 October. Alongside the announcement, Sheeran has released a video for the new track Visiting Hours.

READ MORE: A Cradle Of Filth and Ed Sheeran collaboration is actually on the way, according to Dani Filth

= is the fourth in a series of albums by Sheeran named after mathematical symbols, following +, × and ÷. The announcement follows the release of the track Bad Habits, which arrived in June.

=’s ArtworkA statement notes that production on = will range from both the guitar-led ballads Sheeran is known for to the “weightier, euphoric production moments” of tracks like Bad Habits. Bad Habits, notably, became Sheeran’s 10th UK number one, spending seven weeks on top of the UK singles charts.
Sheeran said of the new record in a statement: “= is a really personal record and one that means a lot to me. My life changed greatly over the past few years – I got married, became a father, experienced loss, and I reflect on these topics over the course of the album. I see it as my coming-of-age record, and I can’t wait to share this next chapter with you.”
Visiting Hours, which has been released today, is a tribute to Sheeran’s late friend and mentor Michael Gudinski. The video features Sheeran and his band performing the acoustic track in a church.
See the video for Visiting Hours below