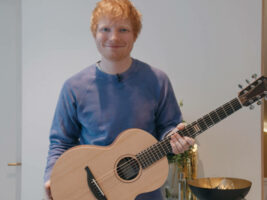 Ed Sheeran has donated a personalised prototype guitar, to be raffled off in aid of a school in his hometown of Framlingham.

The raffle will run until 19 December 2021, with tickets available for £5 each. Three runners up will receive an Ipswich Town Football Club 2021/22 home football shirt, with Ed Sheeran’s ‘tour’ sponsor logo. One lucky winner will receive a prototype = guitar, the latest model to be made in collaboration between Sheeran and Lowden.
The instrument was handmade by luthier George Lowden, using naturally-fallen walnut and spruce. It features an = inlay at the 12th fret, made out of maple inset in the ebony fretboard. Lowden said of the guitar: “It has been an absolute pleasure for me, along with my team, to design and make this limited edition = guitar. The detail of the album cover design along with the etching of the butterfly on the heelwork so well with the other guitar features – especially the figured European walnut and reclaimed spruce used in the soundbox itself.”
Money raised from the raffle will go towards a dedicated music room at Sir Robert Hitcham’s School, as well as extra facilities for disabled students. Any extra funds raised will be distributed by raffle organisers GeeWizz to other SENDS projects for learning disabled and neurodivergent children around Suffolk.
Sheeran said of the raffle: “This is the prototype of the new = guitar by Sheeran Guitars by Lowden. It is one of one, there is not another guitar like this, this is the guitar that gets sent to me to check that all the other guitars are alright.
“If you win it you can have it personalised, I can write some lyrics on it, I’ll do whatever you want! Runners up will get a signed Ipswich shirt by me, good luck and Merry Christmas!”

Find out more and enter into the raffle here.
The post Ed Sheeran donates prototype acoustic to raffle for school in his hometown appeared first on Guitar.com | All Things Guitar.