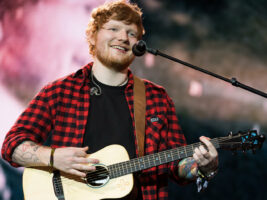 Ed Sheeran isn’t crossing out the possibility of writing heavier music in the future, saying he “would not be opposed to creating” a death metal album.

READ MORE: “It was like a burned match!” How a UK luthier brought Ed Sheeran’s fire-damaged guitar back to life

Sheeran made the comment while speaking to The Sun, where he revealed he “was really into death metal as a kid”.
“I listened to Cradle Of Filth and Slipknot and all that stuff,” the pop star said. “I learnt all those riffs on guitar as a kid. That’s something I’ve never thought about doing – but something I would not be opposed to creating.”
Cradle Of Filth frontman Dani Filth caught word of the interview and took to Instagram to respond: “I’ll believe it when I see it. Fellow Suffolk lad could come good in the end. ‘Dracula’s Castle On The Hill’ anyone?”

In other Ed Sheeran news, a UK luthier has managed to restore his Martin acoustic guitar, a gift from Eric Clapton that ended up being severely damaged in a fire a few years ago and initially thought to be unsalvageable.
Guitar.com spoke to Monty Guitars about the effort it took to restore the burnt guitar. “It’s probably the biggest restoration job I’ve done,” said Monty Guitars main man Matt Gleeson. “We did a load for Elvis Costello once when his warehouse got flooded in 2003 or ’04, which was similar… but this was much more… it was like a burned match!”
The post Ed Sheeran says he “would not be opposed to creating” a metal record appeared first on Guitar.com | All Things Guitar.