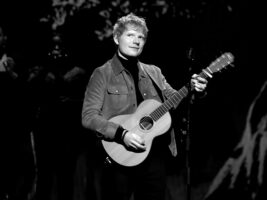 Ed Sheeran has announced that he has tested positive for COVID-19, and therefore cancelled his upcoming in-person live shows in support of his imminent new LP =. The record is set to be released this Friday (29 October).

Writing on social media, Sheeran said: “Hey guys. Quick note to tell you that I’ve sadly tested positive for COVID, so I’m now self-isolating and following government guidelines. It means that I’m now unable to plough ahead with any in person commitments for now, so I’ll be doing as many of my planned interviews/performances as I can from my house. Apologies to anyone I’ve let down. Be safe everyone.”
= is the fourth in a series of albums by Sheeran named after mathematical symbols, following +, × and ÷. Sheeran kicked off the release with the track Bad Habits, which arrived in June.

The video for Bad Habits saw him don a vampiric persona, and hit the town for a late-night kebab with fellow creatures of darkness. Despite this, the music remained standard Sheeran fare. Those wanting a heavier Sheeran project might be in luck, however, as Cradle Of Filth’s Dani Filth has hinted that Sheeran might be teaming up with the metal band for a full-blown collaboration at some point.
Speaking to Kerrang backstage at Bloodstock 2021, Filth revealed: “I’ve actually been emailing with [Sheeran],” before clarifying that he wasn’t joking. “No no, it’s true!” he said. “He actually touched base with me.”
“I’ve been invited up to his place. Well, he said he could come down to mine, but I pointed out to him that I don’t own my own bar or village, and it’d be better if I went there. He said he’d do anything. Quite literally. He said he’s a massive fan. He seems like a genuinely very nice guy actually.”
Whether the correspondence will actually lead to any extreme-metal releases from Sheeran remains to be seen.
=’s full tracklist is below.
1. Tides
2. Shivers
3. First Times
4. Bad Habits
5. Overpass Graffiti
6. The Joker And The Queen
7. Leave Your Life
8. Collide
9. 2step
10. Stop The Rain
11. Love In Slow Motion
12. Visiting Hours
13. Sandman
14. Be Right Now
The post Ed Sheeran tests positive for COVID-19, cancels upcoming shows in support of = appeared first on Guitar.com | All Things Guitar.