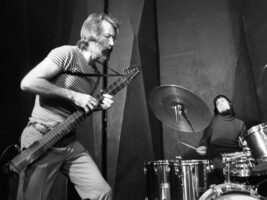 Emmett Chapman, musician and inventor of the Chapman Stick, dies at 85

Emmett Chapman, the musician and inventor of the Chapman Stick, has died at the age of 85.
A statement issued by Chapman’s company, Stick Enterprises, announced that its founder passed away at home on Monday (1 November) “after a long battle with cancer”. A funeral service is planned for 12 November, and the company will be closed until 15 November.
Chapman began his music career in the late 60s as a guitar player, performing alongside the likes of Barney Kessel and Tim Buckley before becoming a bandleader himself.
The pioneer of the “Free Hands” two-handed tapping method, Chapman developed a custom nine-string guitar – dubbed the “Freedom Guitar” – into the Stick, a dedicated instrument to properly accommodate the playing method.
The Stick playing method – along with its unique tuning – made it especially suited to handling chord melody. To promote the instrument, Chapman toured extensively throughout the 1970s and released an album, Parallel Galaxy, in 1985 to show off the instrument’s capabilities.
In 1974, between Chapman and his wife Yuta formed Stick Enterprises to sell the instrument to players around the world.

Chapman was still implementing regular improvements and modifications to the instrument up until 2019, as documented in a timeline on the Stick website.
The Chapman Stick found a particularly devoted fanbase with musicians in fusion and progressive rock circles, with some of its most prominent players being Tony Levin (King Crimson, Peter Gabriel), John Myung (Dream Theater), Alphonso Johnson (Weather Report) and Mike Oldfield.
The post Emmett Chapman, musician and inventor of the Chapman Stick, dies at 85 appeared first on Guitar.com | All Things Guitar.