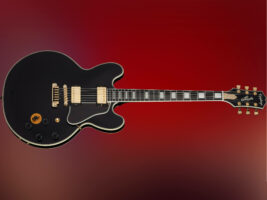 BB King fans can now get their hands on an Epiphone version of Lucille, a semi-hollow electric based on the blues legend’s favourite ES guitars.

READ MORE: Why BB King’s Lucille was more than just any old guitar

The Epiphone BB King Lucille pays tribute to the late musician’s famed Ebony semi-hollows – each named Lucille.
The guitar starts with a five-ply layered maple body with spruce bracing and a maple centre block. Its neck is also of maple, with a rounded C profile and a 24.75-inch scale length. You’ll find that topped with an Ebony fingerboard fitted with 22 medium jumbo frets and pearloid block inlays.
The headstock is a 1960s-style Kalamazoo design adorned with a modern Epiphone logo, as well as the Lucille logo inlayed in Mother-Of-Pearl. There’s also an golde truss rod cover with “B.B. King” engraved onto it to salute the blues great.
Pickups include a pair of Alnico Classic Pro humbuckers, which route to two sets of volume and tone controls and a six-position Varitone switch and a three-way selector. The guitar also has two quarter-inch jacks for mono and stereo outputs.
The Varitone switch takes preset slices out of the midrange for tonal variety, with positions two and three being favourites of Mr. King.
Hardware on Lucille is all Gold and includes an Epiphone Tune-O-Matic, Grover tuners with keystone buttons, and a TP-6 stop bar with fine tuners.

The Epiphone BB King Lucille comes with an EpiLite case and is priced at $949.
Learn more at epiphone.com
The post Epiphone’s BB King Lucille is a tribute to the ES models played by the blues legend appeared first on Guitar.com | All Things Guitar.