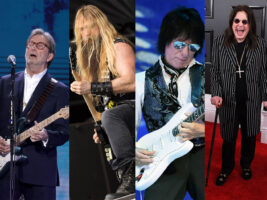 Ozzy Osbourne has revealed he’s recruiting an all-star cast of guitarists for his next album, the follow up to last year’s Ordinary Man.

Speaking on Ozzy’s Boneyard on Sirius XM, the ex-Sabbath vocalist revealed: “On this new album, I’m working with Jeff Beck, Eric Clapton, Tony Iommi and Zakk [Wylde].”
He also shared how the long-distance collaborations were working, saying: “You just write the song and you just ask them to sing [or play] what you [give them]. The good thing is it’s interesting to work with somebody else. But the bad thing is if it don’t work, you can’t [let it go] ‘cause they’ll get all pissed off.”
He was then asked if he ever had anything he’d written rejected by a collaborator. “No,” he said. “Eric Clapton, on this new record, one of the lyrics was about Jesus, and he wasn’t sure about that. But it was alright in the end… [his contribution] is very good.”
Ozzy is currently working on his new album with guitarist and producer Andrew Watt, who also worked with Ozzy for Ordinary Man. Watt’s recent credits are a good argument that the guitar is alive and well in popular music, splitting his production and session-playing time across artists such as Miley Cyrus and Dua Lipa as well as Ozzy Osbourne.
As well as the new revelation of an all-star guitar lineup, the LP is also slated to see contributions from members of the Foo Fighters, Red Hot Chili Peppers and Metallica.
Speaking to Guitar World, Andrew Watt revealed: “There’s a bunch of people involved. I can’t say for sure until the end, but I started doing a bunch of basic tracks with Chad [Smith, drummer for the Red Hot Chili Peppers] and Robert Trujillo [bassist for Metallica], who used to play in Ozzy’s band. And [Foo Fighters drummer] Taylor Hawkins also came in and played a bunch on the record as well.”
The post Eric Clapton, Jeff Beck, Tony Iommi and Zakk Wylde to appear on Ozzy Osbourne’s next LP appeared first on Guitar.com | All Things Guitar.